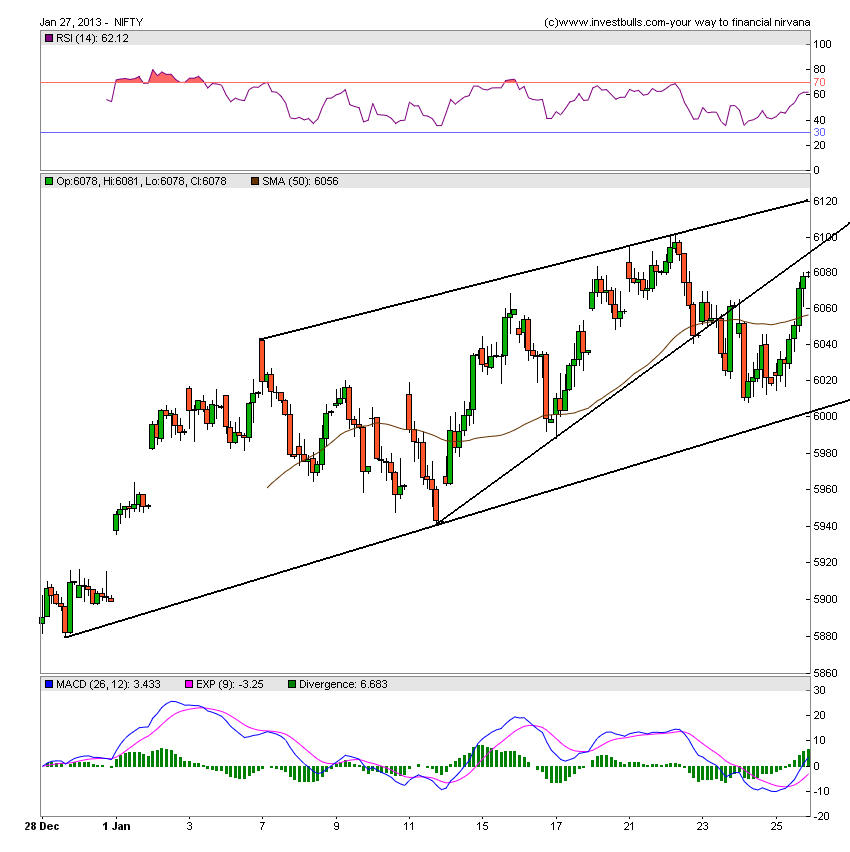 Q3 results, RBI’s monetary policy review will remain in focus next week and will decide the further trend of Nifty. Q3 numbers have been good till now with RIL and Maruti the major index beating street expectation, Next week ICICI and Rel Infra numbers will be in focus. This weak will be remembered for the butchering of mid cap stocks,HDIL IVRCL traders favorites stocks  were down 10-25%.  So eventhough Nifty is not correcting, retail traders can still feel the brunt of bears. FOMC meeting on 29-30 Jan will dictate the global markets as decision of Fed to cut on QE will be keenly seen by market participants (World Economic calender  for coming weeks Event Calender ) Nifty is trading comfortably above 50 SMA which lies at 6056. We had a volatile move in 93 points range in last week and with Nifty taking resistance at our Weekly Trend Deciding level of 6100 and falling all the way to 6007. Mid caps falling and Nifty also correcting and consolidation in small range  before the monetary policy give a hint that rate cut is coming and Nifty will rally after rate cuts

Technically till 6100 is not broken market will continue with its trend of Sell on Rise . This is what we discussed in Jan 25 analysis  and Nifty made a High of 6100 and again turned back hope traders made use of analysis were able to benefit out of the rally. Coming week we should be a breakout above 6100 or breakdown below 6000. As it is an expiry week also so lot of volatility is expected as traders will rollover there position also after RBI policy is announced. Nifty is also forming rising wedge pattern which is bearish once support coming at 6013 gets broken. MACD indicator is going into sideways move and RSI took support at 50 and bounced back and Stochastic is on verge of giving positive crossover. As discussed earlier Fibonacci fan helps in finding potential tops and Bottom of market from short term prospective. If we see the chart closely with Fibonacci fans 6200  is level of resistance, and 6000 is level of support Nifty as per Fibo Fans.Nifty made low of 6007 and bounced back 🙂 Nifty has formed spinning top candlestick pattern after last  weeks of bullish engulfing pattern closed the week positive with  gain of 10 points @ 6074.Next week we would require the follow up move with a close above 6100 on weekly basis.Higher Highs and Higher low  formation is maintained on Weekly charts which is a bullish indication Monthly chart are approaching higher end trendline at 6100 closing above it will give a fresh breakout in monthly chart.