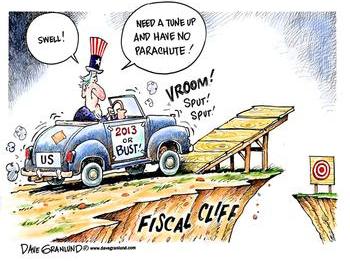 Fiscal Cliff means there is a limit over which government can borrow, once the limit is breached automatic reduction in government spending and tax increases come in effect.

On or around Jan. 1, about $500 billion in tax increases and $200 billion in spending cuts are scheduled to take effect. That’s equal to about four percent of GDP and can bring US economy back into recession.

So to avoid such disaster  US Senate will be working on Sunday ie 30th December which has happened only 18 times since 1880. If Senate is unable to come to a viable solution and fiscal cliff limits is crossed consequences will be dire as mentioned below:

Can the US avoid falling off the cliff?

2 thoughts on “The Fiscal Cliff Explained”