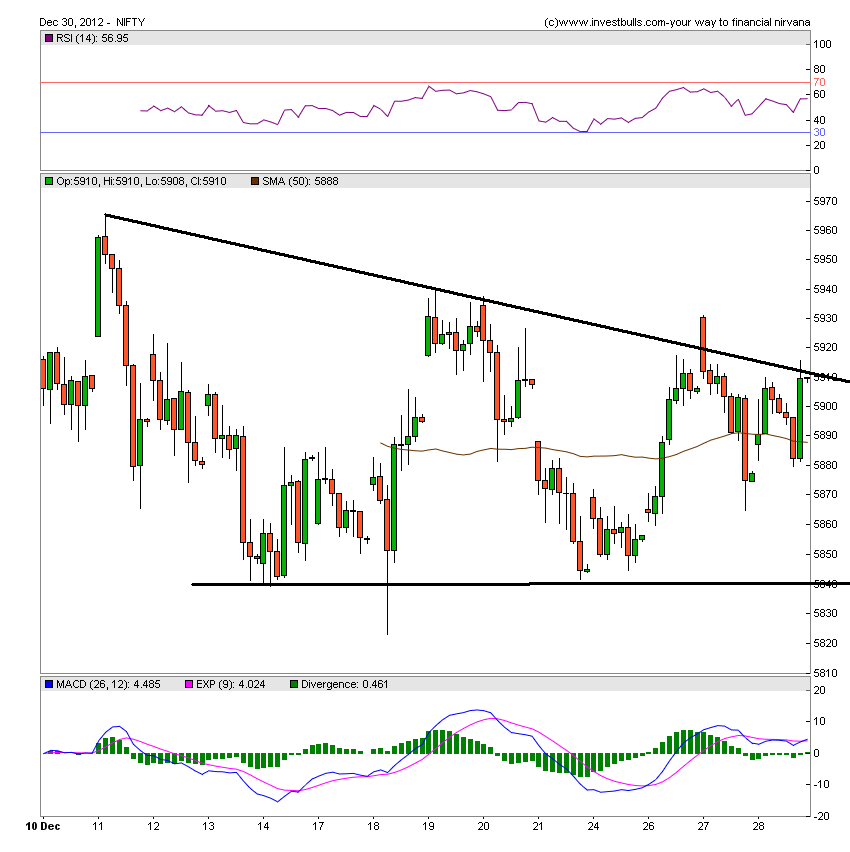 Nifty gave then Highest Weekly Close in last two Years (2011-2012).Nifty and Sensex continued with there consolidation phase, positive takeaway from last week’s movement is that the Sensex is holding above 19,000 and the Nifty continues above 5,825 which gives bullish touch this phase of consolidation. All eyes on US fiscal cliff talks which are going on in US? All Financial Markets are having eyes on Will US be able to avoid the Fiscal cliff? Want to Know what is Fiscal Cliff (The Fiscal Cliff Explained http://bit.ly/VJAcSS) Nifty continues to trade above or below the important 50 Hour SMA , as discussed in last post till 5930-5830 is not crossed either stay out of trade or buy support sell resistance. As a matter of fact many traders who have interacted with me have almost lost all profit they made in November month rally. Making money is not important protecting the profit in Stock market.  Its almost 13 trading days nifty has been trading range 5823-5930 after breakout on November expiry.

As discussed last week  resistance of previous rise ie.5815-25 will become support for any downfall to come in Nifty. December Expiry Nifty took support at 20 SMA@5866 and bounced back smartly as shown in below chart. We have mentioned 2 week back 5950-5965 is an important supply zone range and Nifty made top at the 5965 and unable to breach it till date. If one observe the Nifty cycle closely 21 trading session are spent in zone of consolidation in range of 5965-5823 after a rise of 200-250 points in Nov last week. So till traders do not see a breakout/breakdown trade in less qty. Do not repent on losing 30-50 points but rejoice getting 150-200 points. Always remember market make 80% of move in 20% of times. Nifty is taking resistance at the top end of channel  so 5930 becomes an important resistance before 5965 is crossed. MACD is given a SELL, RSI is still showing negative divergence.