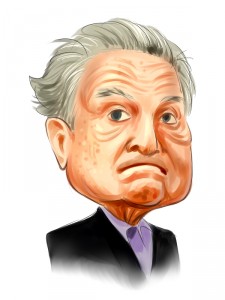 On September 16, 1992 – later dubbed “Black Wednesday” — the day the  British government abandoned the European Exchange Rate Mechanism (ERM), and the pound was devalued by 20% George Soros made over $1.2 billion  on his short sterling trade  and was dubbed  “The Man Who Broke the Bank of England.”  Soros funds management has returned about 20 percent a year, on average, since 1969. These are amazing results, and some of the best ever achieved. Many of the years he was personally running it he had 30% returns and two years returned an amazing 100%.

“I’m only rich because I know when I’m wrong…I basically have survived by recognizing my mistakes.”

“My approach works not by making valid predictions but by allowing me to correct false ones.”

“The markets are always on the side of exuberance or fear. It’s fear and greed. Right now greed has the better of it, which is rather nice (for investors) as long as it doesn’t get out of hand,”

“Once we realize that imperfect understanding is the human condition there is no shame in being wrong, only in failing to correct our mistakes.”

“The worse a situation becomes, the less it takes to turn it around, and the bigger the upside.”

“If investing is entertaining, if you’re having fun, you’re probably not making any money. Good investing is boring.”

“Markets are constantly in a state of uncertainty and flux, and money is made by discounting the obvious and betting on the unexpected.”

“We try to catch new trends early and in later stages we try to catch trend reversals. Therefore, we tend to stabilize rather than destabilize the market. We are not doing this as a public service. It is our style of making money.”

“The financial markets generally are unpredictable. So that one has to have different scenarios… The idea that you can actually predict what’s going to happen contradicts my way of looking at the market.”

Whatever you think about George Soros personally and his politics, I believe there is a lot of wisdom in his words. They contain wisdom that can help a trader searching for success in the markets come much closer to finding it.

Okay, now you can bring back your political opinions and feel what you may about George Soros and his political ideals. Have at it.