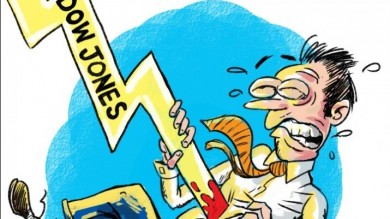 It seems like only last night everyone was celebrating more hope, if not much change. Now comes the hangover. The Dow Jones intraday drop is now 2.23% (and rising), greater than the biggest drop so far in 2012 record on June 1. The last time the market plunged as much: literally one year ago, or November 9, 2011. Sadly, it appears that one can’t have their Dow Jones Industrial Average and redistribute it too.

And if the surge in vol the last time we had moves of this magnitude is any indication, we can solmenly say that the world’s most overrated job for the next 2 months (and 4 years) will be the Chief Redemption Officer, at any hedge fund.