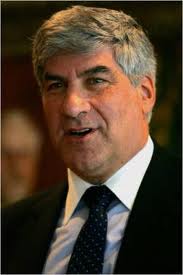 Bruce Stanley Kovner  is the founder and Chairman of Caxton Associates, a hedge fund that trades a global macro strategy and is considered amongst the worlds top and largest 10 hedge funds with an estimated $14 billion under management . In March 2011, Kovner had an estimated net worth of around $4.5 billion

To this day, when something happens to disturb my emotional equilibrium and my sense of what the world is like, I close out all positions related to that event.

On the first rule of trading:

The first rule of trading — there are probably many first rules — is don’t get caught in a situation in which you can lose a great deal of money for reasons you don’t understand.

On making a million:

On allowing for mistakes:

On elements of a successful trading:

I’m not sure one can really define why some traders make it, while others do not. For myself, I can think of two important elements. First, I have the ability to imagine configurations of the world different from today and really believe it can happen. I can imagine that soybean prices can double or that the dollar can fall to 100 yen. Second, I stay rational and disciplined under pressure.

[Successful traders are] strong, independent, and contrary in the extreme. They are able to take positions others are unwilling to take. They are disciplined enough to take the right size positions. A greedy trader always blows out.

On having a market view:

I almost always trade on a market view; I don’t trade simply on technical information. I use technical analysis a great deal and it is terrific, but I can’t hold a position unless I understand why the market should move.

…there are well-informed traders who know much more than I do. I simply put things together… The market usually leads because there are people who know more than you do.

…For me, technical analysis is like a thermometer. Fundamentalists who say they are not going to pay any attention to the charts are like a doctor who says he’s not going to take a patient’s temperature. But, of course, that would be sheer folly. If you are a responsible participant in the market, you always want to know where the market is — whether it is hot and excitable, or cold and stagnant. You want to know everything you can about the market to give you an edge.

…Technical analysis reflects the voice of the entire marketplace and, therefore, does pick up unusual behavior. By definition, anything that creates a new chart pattern is something unusual. It is very important for me to study the details of price action to see if I can observe something about how everybody is voting. Studying the charts is absolutely critical and alerts me to existing disequilibria and potential changes.

On trading ranges and price patterns:

…as a trader who has seen a great deal and been in a lot of markets, there is nothing disconcerting to me about a price move out of a trading range that nobody understands.

…Tight congestions in which a breakout occurs for reasons that nobody understands are usually good risk/reward trades.

…The more a price pattern is observed by speculators, the more prone you are to have false signals. The more a market is the product of nonspeculative activity, the greater the significance of technical breakouts.

…The general rule is: the less observed, the better the trade.

Whenever I enter a position, I have a predetermined stop. That is the only way I can sleep. I know where I’m getting out before I get in. The position size on a trade is determined by the stop, and the stop is determined on a technical basis… I always put my stop behind some technical barrier.”

I never think about [stop vulnerability], because the point about a technical barrier — and I’ve studied the technical aspects of the market for a long time — is that the market shouldn’t go there if you are right.

On the emotional burden of trading:

The emotional burden of trading is substantial; on any given day, I could lose millions of dollars. If you personalize these losses, you can’t trade.

One of the jobs of a good trader is to imagine alternative scenarios. I try to form many different mental pictures of what the world should be like and wait for one of them to be confirmed. You keep trying them on one at at a time. Inevitably, most of these pictures will turn out to be wrong — that is, only a few elements of the picture may prove correct. But then, all of a sudden, you will find that in one picture, nine out of ten elements click. That scenario then becomes your image of the world reality.

What I am really looking for is a consensus the market is not confirming. I like to know that there are a lot of people who are going to be wrong.

On stocks vs commodities:

The stock market has far more short-term countertrends. After the market has gone up, it always wants to come down. The commodity markets are driven by supply and demand for physical goods; if there is a true shortage, prices will tend to keep trending higher.

On trading too big:

My experience with novice traders is that they trade three to five times too big. They are taking 5 to 10 percent risks on a trade when they should be taking 1 to 2 percent risks.

On the dangers of correlation:

Through bitter experience, I have learned that a mistake in position correlation is the root of some of the most serious problems in trading. If you have eight highly correlated positions, then you are really trading one position that is eight times as large.