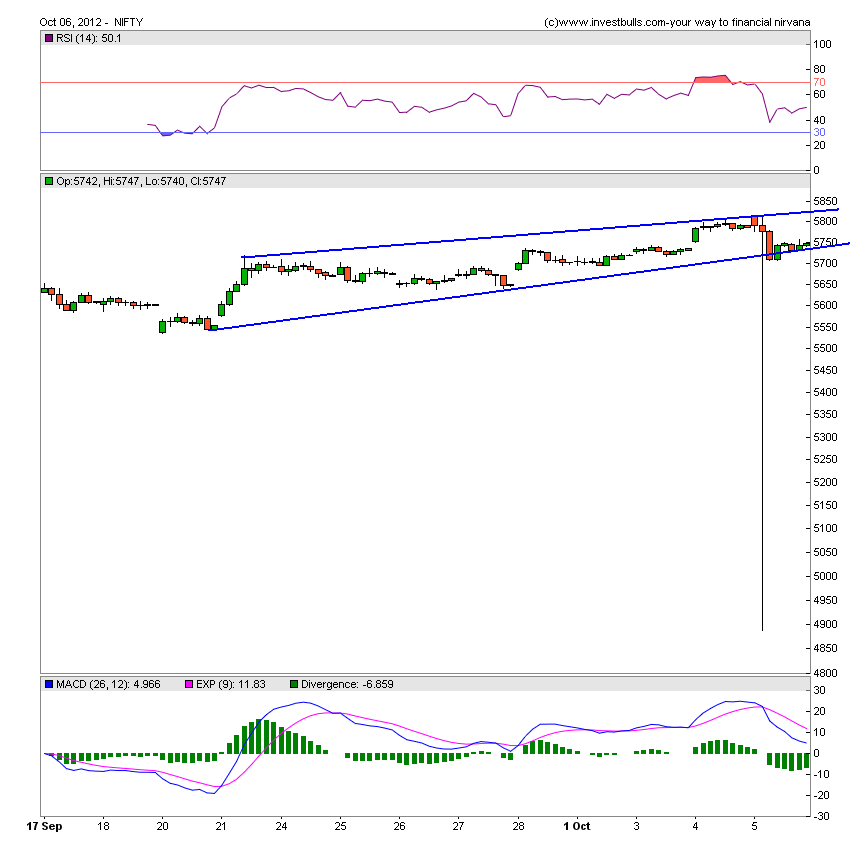 Flash Crash Nifty  has been dramatic and opens a can of worms on how vulnerable are capital markets to human error where a dealer punching a wrong number can lead to a900 point fall in Nifty and a algorithm going berserk can cause a 440Millon $ loss to Knight capital in US (Happened on 22 Aug 2012).

Coming week Infosys will be declaring its Q4 results on 12 October and we have IIP data also. Also investor sentiment took a beating after what happened on Friday.

Do remember Flash Crash are call of future as happened in past history when NF crashed from 5300-5000 on 20  April 2012 or the May 2011 crash of Dow Jones of 1000 points. All rates were seen after few months, so lets see WILL this time history repeat? Nifty Hourly chart took support at channel bottom of  5706. Close look at Hourly chart reveals 11 Hourly candles retraced in a single red candle which shows the case of fast retracement .Till we hold 5690-5706 range possible move till 5815-5852 do exists.

Many traders have asked me is the gap filling completed in Nifty after we saw it falling till 4888. My answer is emphatic NO.

Let me put down my reasoning

1. BSE Sensex no gap filling has occurred as Lower Circuit has hit NSE only, BSE was functioning normally and was down 300 points.

Going by above reasoning I will consider it as an freak trade and will just ignore it as an aberration.

Bulls closed above 5740 on both daily and Weekly basis. Now the resistance  of 5740 should act as support of nifty on closing basis. If we observe Daily chart closely tricky range comes as 5740-5775,Closing above this 5900 is done deal. As seen in above chart any close above the upper line of Andrew’s Pitchfork can see nifty rallying to 5852-5900 odd levels. Now results of Q4 holds the key on Nifty breaking the last swing high of 5940 and closing above the elusive level of 6000. Nifty Fibonacci Retracements from 4531-5630 are drawn in above chart,Major resistance at 61.8% Golden ratio at 5648 which nifty took support  last week made double bottom at 5638 and bounced,successfully closed above it. Now unable to cross 5740 pullback can be seen till 5735 odd levels.

As discussed earlier Fibo Fans helps in finding potential tops and Bottom of market from short term prospective. If we see the chart closely Nifty has formed a potential top for the time being if 5815 is not crossed by next 2-3 trading sessions.

Nifty was up .8% WoW basis,  5 white weekly candle in a row and  closed above crucial trend line resistance of 5700,
Weekly charts are overbought and a consolidation between 5638-5750 will be the best outcome for bulls for coming week. Close above 5740 can further fuel the rally on Upside till 5850 as seen in above Nifty Weekly chart with trendline.This is what we discussed last week nifty made a high of 5815 and turned back, now key is holding 5700 on weekly closing basis for further rally. Close above 5217 is bullish for market for rest of year.Support on Monthly charts comes at 5604.As shown in below chart September is month of Big moves and we have moved 8.5% . October series after big move seen in September should be a cool off month in which we will see range trading moves from 5500-5850.