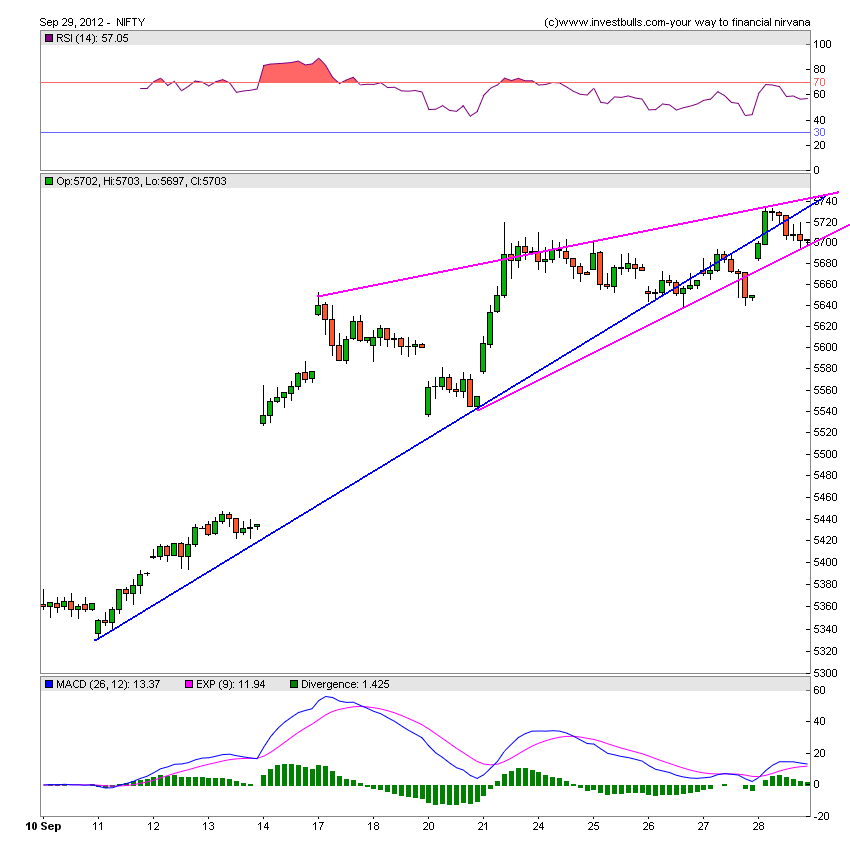 Nifty ended the Q3 with a positive note and a fresh 52 Week high of 5735  but we are entering Q4 with some bad data which came out today. Current Account Deficit came in at 3.9% of GDP against an expectation of 3.3%. Indian Rupee closed at 52.69 almost at 6 month high on sustained FII flows. Nifty Hourly chart took support at rising trendline at 5695 on Friday and closed above 5700. Now we are near a trend line congestion near 5740-5775 range and pullback should be expected from this range. Friday also we were unable to cross 5740 so next week will be decider in terms of will 5740 remain elusive for bulls or not?

Bulls took support at 5638 formed double bottom after consolidation and made a close above 5700 first time after April 2011 but still unable to close above 5740.If we observe Daily chart closely tricky range comes as 5740-5775,Closing above this 5900 is done deal. Nifty Fibonacci Retracements from 4531-5630 are drawn in above chart,Major resistance at 61.8% Golden ratio at 5648 which nifty took support  last week made double bottom at 5638 and bounced,successfully closed above it. Now unable to cross 5740 pullback can be seen till 5735 odd levels. As discussed earlier Fibo Fans helps in finding potential tops and Bottom of market from short term prospective. If we see the chart closely Nifty has formed a potential top for the time being if 5735 is not crossed by next 2-3 trading sessions. Nifty was up .98% WoW basis, closed above crucial trend line resistance, As discussed last week 5635 should provide support we made a low of 5638 and bounced back . Only concern is Doji Candlestick formed on Weekly charts and Shooting star on Daily charts both of which are reversal patterns but follow up price action is required.

Close above 5740 can further fuel the rally on Upside till 5850 as seen in above Nifty Weekly chart with trendline. Close above 5217 is bullish for market for rest of year.Support on Monthly charts comes at 5498.As shown in below chart September is month of Big moves and we have moved 8.5% . October series after big move seen in September should be a cool off month in which we will see range trading moves from 5500-5850.