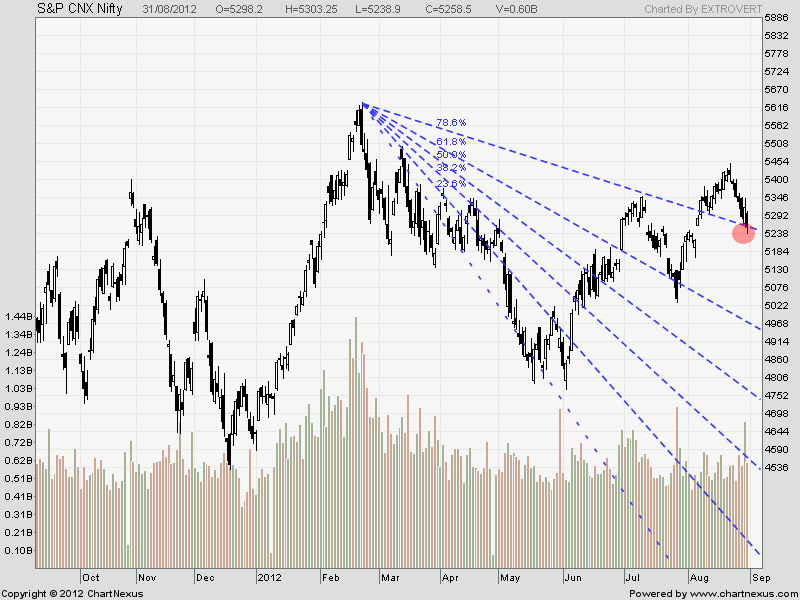 GAAR panel draft report came up yesterday and the changes proposed by Shome panel are market friendly. Read the report by clicking on the link.

Fed chairman at Jack Holes did not disappointed the market by saying QE 3 on cards but did not announced at Jack’s Hole meeting. Read the Fed speech by clicking on the link

Indian market GDP came in better than expected at 5.5% so rate cut hope have again diminished. Nifty after 4 week of rise was down 2.4% WoW basis. Whats in store for next week lets jump and see the Nifty technical outlook Nifty hourly charts is seen the convergence of three trend lines and close below the 50 Hour SMA.Positive divergence has started emerging in Hourly charts, close above 5265 on hourly basis can lead to a move till 5300 and 5330.

Nifty opened with a gap down made a high of 5400 and is on a slow and steady waterfall decline from 5400 till 5238. As we have discussed in previous analysis 5448 will be a strong resistance and Nifty closed below it unable to break the red trendline and started the much anticipated decline.Now its entering the support zone of 5200-5220 which is gap area and trendline support also. So lighten up your shorts in range of 5220-5200 range. Trading should be always simple and should not have ifs and buts, See how market respects the 50 DMA. closing above it from last 2 days showing the buying coming at lower levels.Catch is to follow a single trading system religiously. Nifty Fibonacci Retracements from 4770-5630 are drawn in above chart,Close look at the same reveals strong support at 5199 levels which is 50% retracement. Bull markets should hold 50% retracement. Nifty Fibonacci fans are an amazing tool to find tops and bottom for medium term as seen in above chart. Nifty has tried to close above the 78.6% trendline from past 2 days. Next week price action will be nice to watch. Nifty was down 2.4% WoW basis, I have discussed 2 week back in weekly analysis Nifty unable to close above 5400 on Weekly basis will invite correction and same holds true. Nifty last week high of 5400 and made a low of 5238.Now Weekly charts are approaching crucial support zone of rising trendline at 5200 odd levels so bounce back should be expected. Close above 5217 is bullish for market for rest of year.Monthly Charts of Nifty is giving resistance at 5380 break of same will lead to a move till 5500.Support on Monthly charts comes at 5214

In Nutshell:Daily charts are giving a Buy signal till 5238 is not broken,Weekly charts are signalling buy with sl 5190 and Monthly chart closed above 5217 signalling September series to be bullish. So trade on time frame you follow ie. Daily,Weekly or Monthly

I am planning to conduct a training session in Delhi in last week of September interested person can mail me @bhandaribrahmesh@gmail.com or call at 09985711341 to know further details