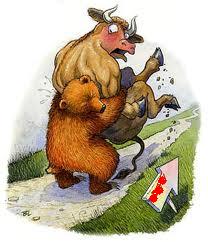 PMI data Purchasing Manufacturing Index was released for European countries and India Summing the data Indicates 80% Of The World Is Now In Contraction. Chinese stock market last week made 3 year low, as i always say stock market discounts news well in advance and on Sunday we got the news Chinese PMI contracted first time in 9 months. Never fight the market and flow with the trend is the general thesis which has been proven correct before,today and in future also.

2. As Nifty Future was down by 8  points and OI has decreased by 6289,so profit booking happened on longs carried by FII in August Series.So FII have been reducing the long exposure in Index future and shorting stock futures.

3. NS closed at 5254 after making the higher low of 5243 , but bulls were disappointed as Nifty closed below crucial level of 5260. Only i have been advocating Nifty is in Sell on Rise mode which proved again today as Nifty used the weekend development on GAAR issue to open up but selling resumed at higher levels and closed near the lows of the day.

5. Nifty September  OI is at 1.97 cores with an addition  of 1.47 Lakh in OI,so shorts have started entering the system. Rollover range for September Series comes at 5400-5290. We have closed below  529o today so we can see follow up action tomorrow bears pressing more on downside.

6. Total F&O turnover was highest ever to  0.76 lakh  Cores  with total contract traded at 1.92  lakh. Cash volumes were dismissal today.

10. Nifty Futures Trend Deciding level is 5239, Trend Changer at 5303 NF. (Above this Level Bulls will rule Nifty/Below this levels Bears have upper hand).

Disclaimer: These are my personal views and trade taken on these observation should be traded with strict Sl