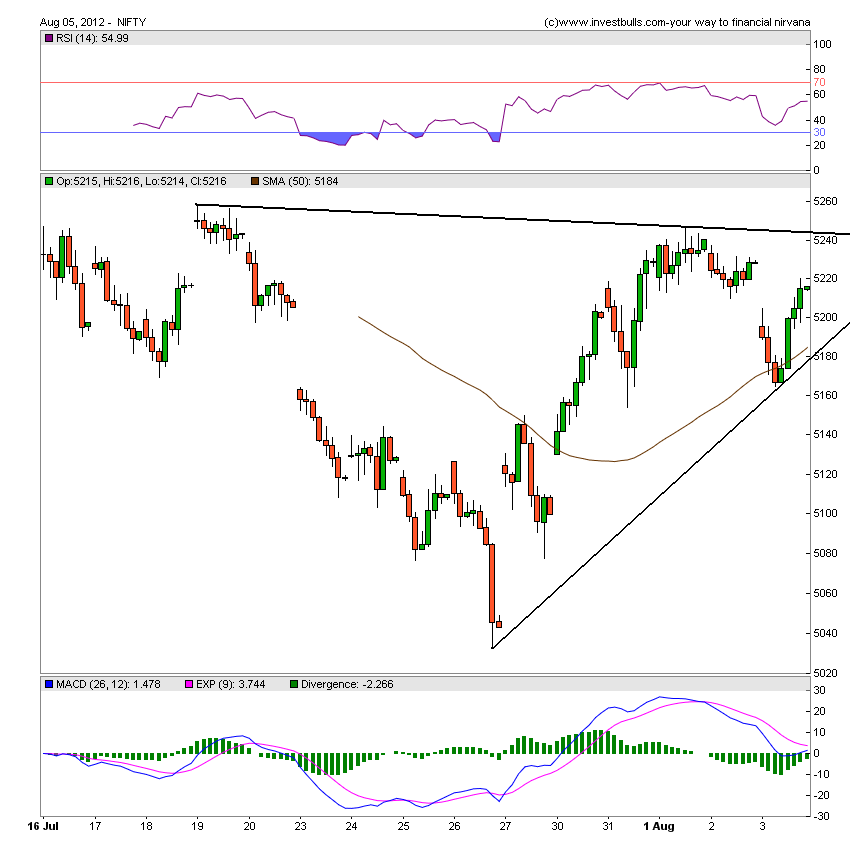 World markets had a hell of ride last week, Am talking in particular of Spain,Italy and peripheral Europe market,For instance Spanish market were down 8% intraday after Mr Darghi spooked the financial market, on Friday Spanish market was up by 5% again so things are getting highly volatile. Euro as a currency made a swing high and low of 1.21 to 1.24 is matter of hours. Indian markets stayed on the bullish course which started from 5033 NS and facing hurdle near 5259. Telecom Policy by TRAI  on keeping spectrum reserve price at 14K crores which is lower than 22% which might be a welcome move for the depressed telecom sector. In one reads fine print in details The biggest concession made is that telcos have to pay only one-third the auction price upfront. After this they have a two-year moratorium, and the rest is payable in 10 annual installments. In short, they have 12 years to pay up. So telecom stocks will be in focus on Monday. Nifty Hourly Charts are forming ascending triangle with breakout above 5267 NS.Monday should be another gap up day and its possibility we might open around 5259-67 range. So trade cautiously till be close above 5267 to confirm the breakout.

So these levels should be noted down carefully to find further support and resistance.On Monday gap area of  5267-5306 should be tested. On Daily charts nifty has broken above 5200 and closed above it for 4 days running which signify the bull power.Nifty is consolidating before taking the major resistance of 5259-67 range. Will Bulls be able to do it on Monday? Nifty Spot trading channel in a   channel with breakout above 5306 and breakdown below 5085. MACD is in BUy mode,RSI at 30 and Stochastic approaching overbought, We are also forming a fast rise set up on daily chart which should materialize next week with break of 5267 and 5306. As i discussed few days before Fibonacci fans are a wonderful tools to find swing  Top and swing  bottom of Nifty, As shown above 5043 seems to be swing bottom as per Fibo charts and Swing top is coming near 5270. Nifty Fibonacci Retracements from 4770-5350 are drawn in above chart,Closer look at the same gives that Nifty has been consolidating in the range of 50% retracement at 5199 and 61.8% retracmenet at 5301. Any close above 5301 will give further firepower for bulls to break above 5350. Contracting triangle with support at 21 Week ema at 5155 and break of  parallel channel with Hammer candlestick formation showing its effect. Trendline resistance coming at 5308 on Weekly chart. Close above 5217 is bullish for market for rest of year.Monthly Charts of Nifty is giving resistance at 5339 break of same will lead to a move till 5445.Support on Monthly charts comes at 4932

In Nutshell:Daily charts are giving a Bullish sign till 5200 is not broken,Weekly charts are signalling Buy on dips with sl 5155 and Monthly chart closed above 5217 signalling August series to be bullish.

Range of 5267-5310 is a crucial range,Bulls unable to capture the same will lead to bears attacking and taking upperhand.