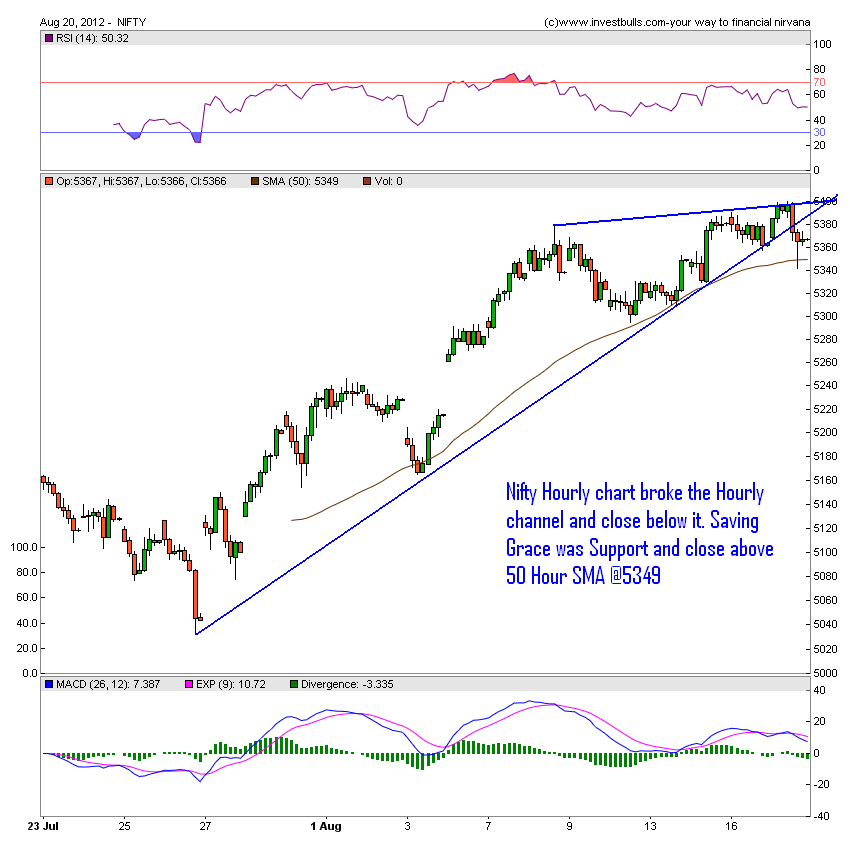 Nifty gained strength for the 3rd consecutive week as  inflation hitting 32 month lows,  but gave up gains  due to disappointing export-import data, release of the controversial CAG reports in the parliament & rising crude prices which have crossed 115$ per barrel.
According to CAG report, financial benefit accrued to private companies due to non-transparent allocation instead of auction of coal blocks was pegged at Rs 1.86 lakh crore. Major Companies amongst those 25 named are Reliance Power, Essar Power, Hindalco, Tata Power, Tata Steel & Jindal Steel and Power.
This has once again casted doubts on the credibility of the Government Functioning which has already been dented to a great extent by the 2G Telecom scam.News on Friday that showed CBI has not chargsheeted Kalmadi in Commonwealth game has brought a new low in the credibility of Government of India. So expect lot of volatility in Equity markets for coming week. Nifty Hourly Charts are forming symmetrical triangle with breakout above 5400 NS.Support now exists at 5340. Till Nifty is trading above 5340 which is 50 Hour SMA bullish momentum is intact. Bulls were able to close above 5350 on weekly basis with a breakout above 5267.Range for Nifty is getting narrower each passing day,and breakout above 5400 or Fall below 5330 is on verge of happening. As seen in above chart the long term trendline which was acting as resistance provided support for Nifty at 5340 on Friday and we bounced back. Negative Divergence have started emerging in Indicators from overbought levels which signals cautious for traders who are holding highly leverages position.Fall whenever it will come will be fast and furious. Nifty Fibonacci Retracements from 4770-5350 are drawn in above chart,Closer look at the same gives that Nifty has been consolidating in the range of 61.8% retracement at 5301 and 5400.Close is still above Golden Ratio of 5301 which shows Bulls are holding there ground. Theory gets invalidated on Weekly close above 5400. Close above 5217 is bullish for market for rest of year.Monthly Charts of Nifty is giving resistance at 5400 break of same will lead to a move till 5445.Support on Monthly charts comes at 5250

In Nutshell:Daily charts are giving a Sell on Rise sign till 5400 is not broken,Weekly charts are signalling Buy on dips with sl 5309 and Monthly chart closed above 5217 signalling August series to be bullish. So trade on time frame you follow ie. Daily,Weekly or Monthly

Range of 5380-5400 is a crucial range,Bulls unable to capture the same will lead to bears attacking and taking upperhand.