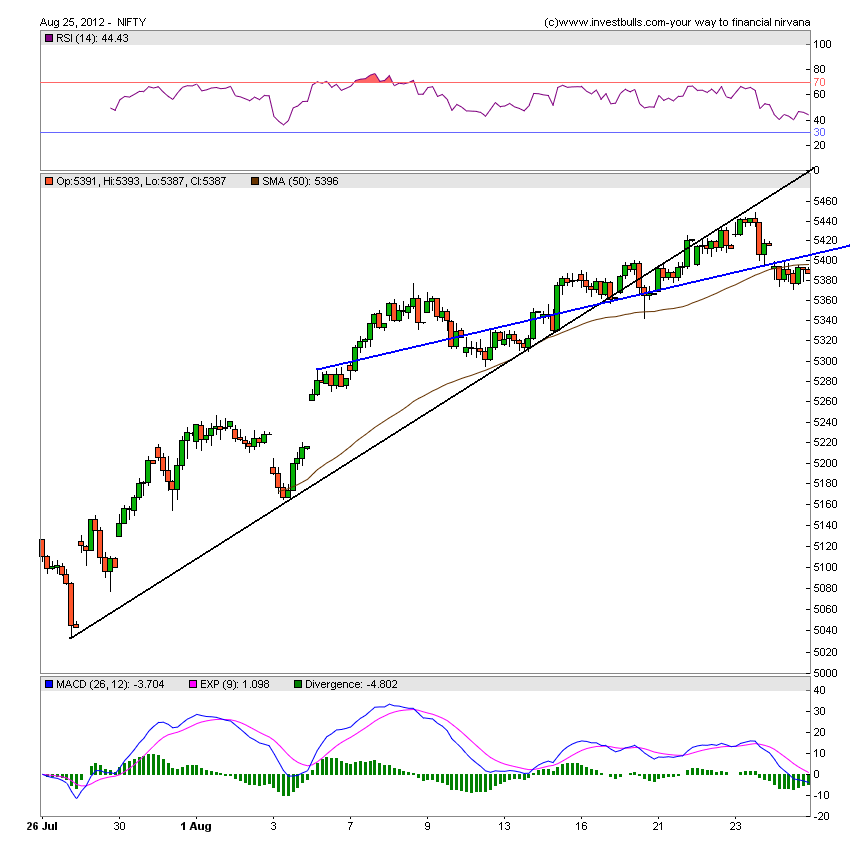 Nifty continued with its positive rise 4 week in a row with rise of 20 points WoW basis, gains were trimmed at the end of session.

Next week, the market will be focused predominantly on the Jackson Hole Symposium which will start on Wednesday and end on Saturday. Fed’s Bernanke and ECB’s Draghi will be the main focus.
Bernanke speaks on Friday at 10 AM.
Draghi will be speaking at 12:25 PM.

The fight for functioning of Parliament is getting dirtier each passing day with BJP asking for resignation and Congress adamant on its stance  and making new strategies to counter BJP. If parliament does not function for coming week also, Capital market should get nervous as FII are pouring money in hope of reform cycle moving but without functioning of parliament ifs difficult for reforms to take place. Nifty Hourly Charts are respecting its trendline,Support has become resistance. Hourly close was below 50 Hour SMA which suggest Bears are getting upper hand on Hourly charts. Close above 5396 would lead an upmove towards higher end of trendline ie. 5449. Unable to close above 50 Hour SMA Nifty will go towards the lower end ie. 5309. Nifty was up 0.4% WoW basis, as in our previous analysis we have discussed range of 5380-5400 is crucial range till we do not get a weekly closing above it, be cautious on your longs. Weekly charts are overbought but no negative divergence is still visible. Only saving grace for bears is Close below 5400. Nifty has now comfortably moved above 100 Week SMA which is now at 5375. Low made on Friday was 5371 :). Weekly momentum is up till we are trading above 5365. So Next week we need to close above 5400 to gain further momentum to the rally. Close above 5217 is bullish for market for rest of year.Monthly Charts of Nifty is giving resistance at 5445 break of same will lead to a move till 5500.Support on Monthly charts comes at 5256

In Nutshell:Daily charts are giving a Sell on Rise sign till 5414 is not broken,Weekly charts are signalling Buy on dips with sl 5313 and Monthly chart closed above 5217 signalling August series to be bullish. So trade on time frame you follow ie. Daily,Weekly or Monthly

Range of 5380-5400 is a crucial range,Bulls unable to capture the same will lead to bears attacking and taking upperhand.