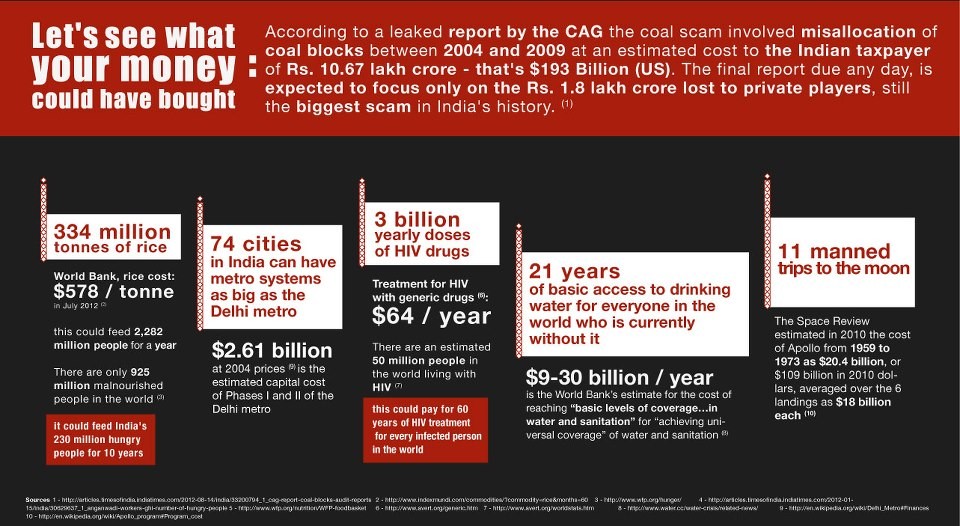 Another Scam Rocked India Today Colgate Scam. So here are some compiled facts about CAG but before going through it just look at the below picture which depicts what 1.86 lakh cores can do to India. So here are 10 facts on the issues that CAG has blasted the government over:

1. In a severe indictment of the UPA government, the CAG report on coal says that 57 coal fields, in the period 2005 to 2009, were allocated to 100 private companies instead of being auctioned or brought under competitive bidding. This, the report says, was an opaque, subjective allotment and caused these private companies to benefit to the tune of Rs 1.86 lakh crore.

2. This will be highly embarrassing for the ruling UPA dispensation as Prime Minister Manmohan Singh himself was at the helm of affairs at the Union Coal Ministry from 2006 to 2009. While the Congress is said to have prepared a strong defense on the issue, it is likely to face a major storm from the Opposition parties in Parliament. The CAG report on coal puts the prime minister in the dock who allegedly allotted 44 billion tonnes of coal at throwaway prices when he was the coal minister.

3. Sources indicate that the government will say that the CAG calculation on the alleged loss to the exchequer – Rs 1.86 lakh crore — is inaccurate as the CAG has not accounted for the varying cost of coal extraction from mine to mine, etc.

4. What the government will find difficult to deny is the fact that after being allotted the coal fields at throwaway prices, many of these private firms sold their companies at huge profits while some others actually sold coal in the open market in utter violation of their terms of contract.

5. With the demand for coal being immediate and huge as the Indian economy boomed, the government did not have the time to wait to change the law which would allow coalfields to be auctioned – as it would have taken years to amend policies, laws and procedures. And since PSUs such as Coal India were unable to handle the surge in demand, private companies were brought into the picture.

6. The prime minister has gone on record some time ago as saying that he would resign if even ‘an iota of truth’ was found in the allegations of corruption made by Team Anna Hazare against him, apart from 14 other Cabinet members.

7. The CAG report on Power too pulled up the UPA government for favouritism. The CAG has alleged that private firms like Tata Power and Reliance power were favoured. The CAG report also accuses the government of changing binding norms after the allotment of power projects.

8. Report alleges that firms like Tata Power and Reliance Power acquired more land than required for the power projects. CAG says that the bidding process was vitiated by allowing Reliance Power to use excess coal from three blocks allocated to the Sasan Ultra Mega Power Project.

9. The CAG also slammed the levy of development fee on passengers at Delhi Airport, and said that the airport vitiated the sanctity of bidding process.

10. CAG said that DIAL would get an undue benefit of Rs 3,415 crore from the levy of development fee on passengers at Delhi Airport. The CAG report has also questioned the role of the then Civil Aviation Minister Praful Patel for favouring GMR, which runs the Delhi Airport.