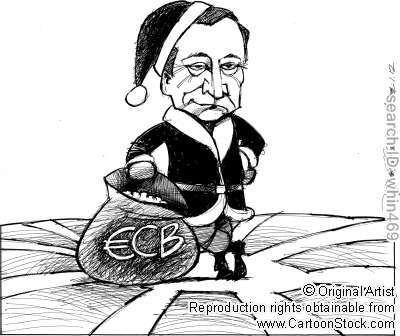 While it is probably not surprising that so many decided to focus on those few words of relevance to an implicitly self-aggrandizing crowd of long-only risk-takers and commission-makers; the truth is that, as UBS notes, “Draghi was stating a fact, not changing a policy”. Putting the fateful sentence in the context of the rest of his speech/interview is critical and most importantly, we agree with UBS’ Justin Knight’s opinion that Draghi did nothing more than make a technical observation on an impairment in monetary policy transmission (as we discussed here). Regardless, if our interpretation is correct, then the rally in peripheral bonds should unwind quickly. The size of the move probably has knocked many shorts out of the market.

Peripheral bond markets rallied sharply on a single sentence uttered by Mario Draghi in an interview with Bloomberg on Thursday. When read in isolation, the sentence appears to indicate a change in policy in which the ECB would begin targeting peripheral yields. However, it is important to put the fateful sentence in the context of Mr. Draghi’s overall remarks. Thus, in our opinion he was doing nothing more than making a technical observation on an impairment in monetary policy transmission.

The sentence in question is:

“To the extent that the size of these sovereign premia hamper the functioning of the monetary policy transmission channels, they come within our mandate”

This implies, perhaps strongly, that the ECB’s mandate includes bringing yields to levels where they do not hamper policy transmission and then keeping yields there. However, this interpretation does not fit either with the context of the rest of his interview, or with previous equally strong statements to the contrary. Indeed, it does not mesh with the current institutional framework in Europe.

Mr. Draghi immediately followed the above remark with

“So we’ll have to cope with this financial fragmentation, addressing these issues”.

Financial fragmentation – the fact that some banks have better access to market liquidity than others ? is the subject of this section of his speech. This sentence suggests that the policy response should be aimed more directly at financial fragmentation directly rather than peripheral yields per se. Put another way, it seems to us that he was simply stating that elevated sovereign risk premia impair the transmission of monetary policy as they raise the cost of bank borrowing (and therefore of lending). In the last ECB press conference, Mr. Draghi stated the favoured policy response to fragmentation:

“But in a highly fragmented situation, when a bank is short of funding, they only can go to the ECB. And if the bank is solvent, the ECB stands ready to provide all the liquidity they need. That is important. We should not forget that. I have been saying this on and on and on since the beginning. The ECB is providing liquidity and will keep all liquidity lines open to solvent banks.”

As policy, this is a far cry from the market’s interpretation du jour. Mr Draghi has been vocal about the ECB’s inability to target peripheral yields. In December he referenced the need to respect the spirit of the rules on monetary financing laid out in the Treaty. In the July press conference he also said:

“With regard to the ECB, I have said on numerous occasions that we are certainly supporting the euro area economy by achieving our objective of price stability in the medium term, and we want to act within the limits of our mandate. I don’t think there is anything to gain by asking the institution to act outside the limits of its mandate, thereby destroying its credibility”

Taking these statements together, it appears to us that the ECB already is addressing financial fragmentation. The Bank is providing unlimited liquidity to banks at the policy rate, and has proven quite willing to adjust its collateral requirements.

More broadly, it seems evident that the ECB does not have a mandate to create the informal fiscal transfer union that a cap on peripheral yields would ultimately imply. The fiscal authorities could provide that mandate. However, from our layman’s perch they seem relatively unconcerned with recent market developments. Furthermore, Article 123 of the EU Treaty, which prohibits monetising debt, has its origins in German economic thinking on the hyperinflation of the early 1920s. Therefore, it is very unlikely to be compromised easily.

We expect Mr. Draghi to clarify his comments in the coming days. That might mean waiting until the August 2 press conference. Regardless, if our interpretation is correct, then the rally in peripheral bonds should unwind quickly. The size of the move probably has knocked many shorts out of the market.