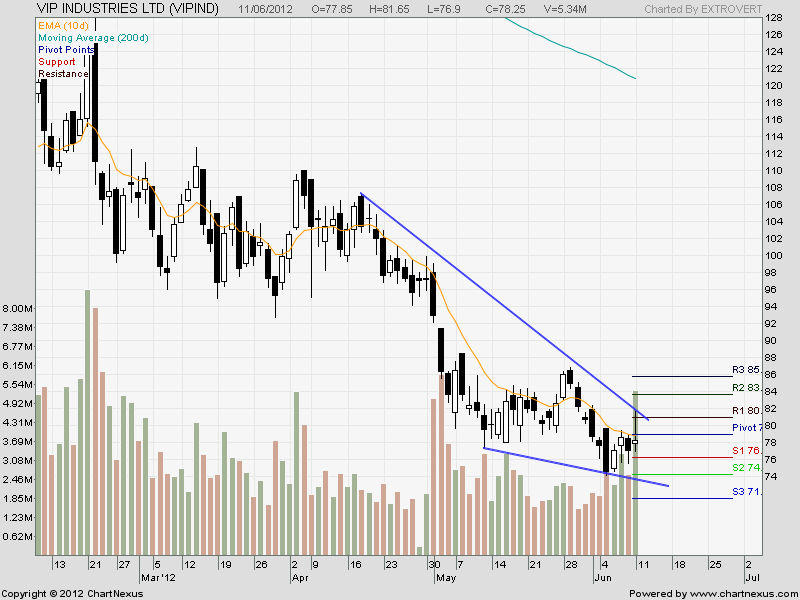 “Don’t think about what the market’s going to do; you have absolutely no control over that. Think about what you’re going to do if it gets there. In particular, you should spend no time at all thinking about those rosy scenarios in which the market goes your way, since in those situations, there’s nothing more for you to do. Focus instead on those things you want least to happen and on what your response will be.”

“I know of a few multimillionaires who started trading with inherited wealth. In each case, they lost it all because they didn’t feel the pain when they were losing. In those formative first few years of trading, they felt they could afford to lose. You’re much better off going into the market on a shoestring, feeling that you can’t afford to lose. I’d rather bet on somebody starting out with a few thousand dollars than on somebody who came in with millions.” Shooting Star Candlestick formed in VIP Industries ,on Monday breaking below 76.9 will confirm the downtrend in VIP IIP data will be declared today and Capital goods stocks will be in focus. LT unable to cross 200 DMA means Bear have upper hand,Prices have taken support at down trending trendline and break of same will be bearish for the stock. HCL Tech has strong support in range of 473-477.Resistance is at 4914,Bearish engulfing pattern was formed on Monday and follow up of same will be seen with break of 474.