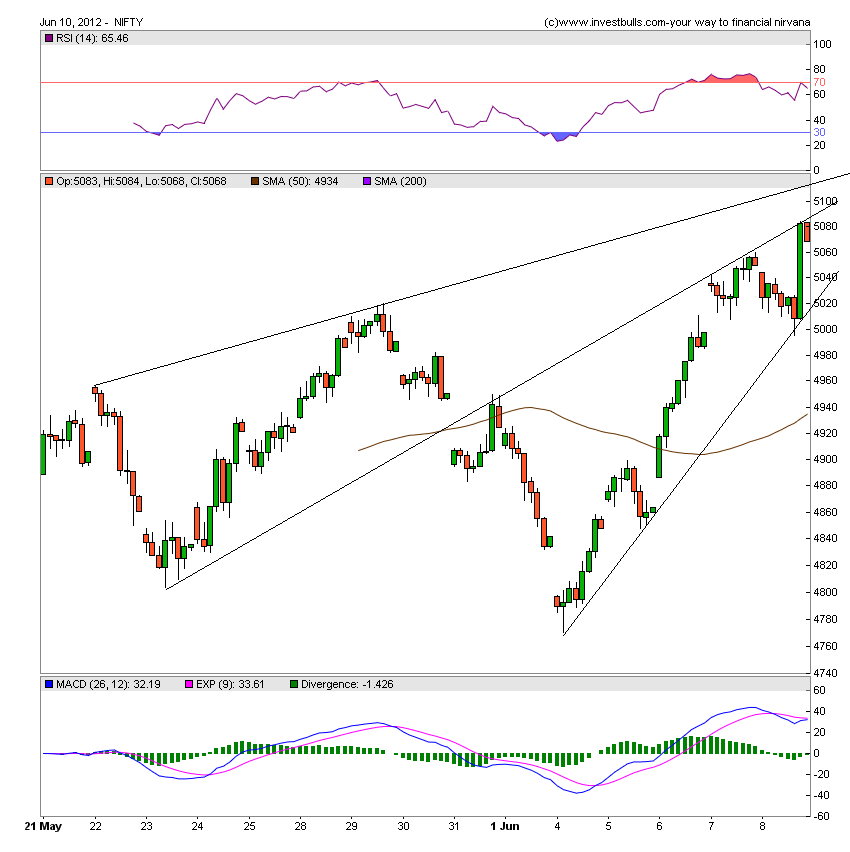 Last Week Analysis Trend Deciding level was 4767 and Nifty made low of 4770 and bounced back with a bang. WoW basis Nifty is up by 4.7% rallying with Global markets. Next Week will be crucial and volatile as we have lot of data points coming from India Macro Perceptive.

Euro zone agrees to lend Spain up to 100 billion euros. So Spain has become the latest causality from EU debt crises, Market rally last week has already factored this news and any initial excitement can be used to book profits in longs. Buy Rumor Sell News Nifty Hourly charts has Spiked up quiet violently on Last Friday after filling the gap of 4997 and closed above 5065. Trendline resistance now comes at 5120.

Gaps does provide an excellent opportunity to trade,Like we had on friday with a close of 4997 gap and a fast and furious rally On Daily charts Nifty has closed above 200 DMA.

200 DMA is trend deciding levels for Bulls and Bears. 2 Weeks before we had an disastrous GDP data and next week markets are up 5% so NEVER TRADE ON NEWS,TRADE ON LEVELS. Next week we will have a Golden Cross or Death Cross when 200 DMA either goes up or below the 50 DMA. Nifty is approaching a crucial resistance level between 5090-5125 levels,So lighten up your longs as genreally such big resistance are not crossed in a single attempt. Pullback till 4925 should be bought into. On Monthly Charts 5102 is an important levels and above it Monthly charts will also come in bullish mode. So things are changing fast and next week will be quiet volatile as lot of data points will come.