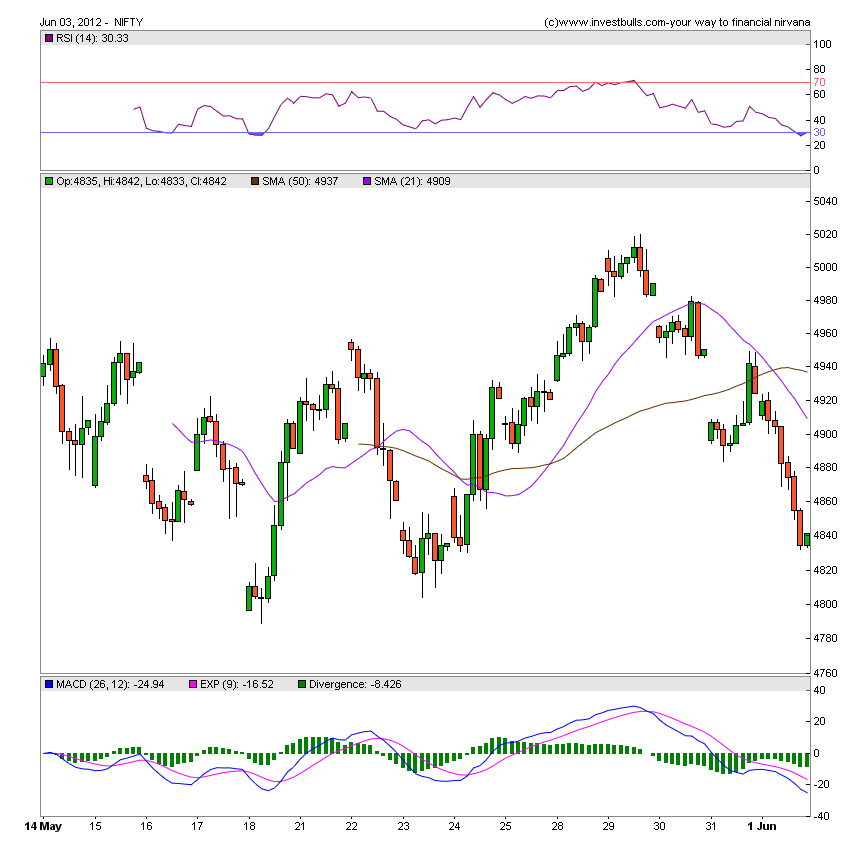 Nifty started the June month with a 100 points fall in NF as slowing down India GDP has given reason for FII to sell followed by continuous run in INR (http://inrliverate.blogspot.in/) which closed at record low of 56.14. Any move above 4840 can give some respite to Bulls till than bears rule will prevail.

Nifty has the following gaps so any close below 5000 will lead to gap filling so keep a close eye on the gap levels mentioned below 1 got filled in current week and still 2 are pending.

Next week gives an high probability of both the gaps to be filled. Keep an eye on the above levels to make some quick points in Nifty. Nifty on daily charts is trading below its 16 moths trendline and its acting resistance for any upmove,break of 4788-67 range will lead to panic fall till 4744 and 4701 levels.If no recovery is seen from 4700 odd levels there is high probability of Nifty touching the swing low of 4531. Recovery can be seen if nifty moves above 4840. 4767 is 78.6% retracement any break and weekly close below it will increase the probability of Nifty touching its 52 week lows. Nifty has closed below the blue trendline for 4 week in a row,which signify lot of selling pressure is coming from upside and followed by detiroating  macros of Indian Economy. Defty which is Nifty is dollar terms is trading at 2987 almost near to Dec 11 lows. Support becoming resistance as Nifty flag upper trendline is acting as an resistance for any upmove which is offing. June will be a crucial month as Break of 4788 will lead to new low on Monthly chart followed by break of trendline also, As such May has been a cruel month and monthly charts are looking extremly week ,Any break below 4531 can lead to capitulation in Nifty. VIX has closed above its 200 DMA and sounds trouble for Bulls.