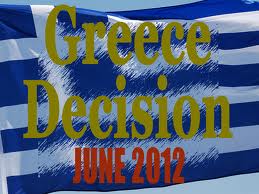 As Sunday’s Greek elections approach, consensus is rising Will it be a  Lehman Brothers moment for Europe. This will come true , if the hard-left bailout-denouncing Syriza party wins, it could set off a cataclysm in the markets, a chain reaction that would set neighbors and then the whole world on fire.

So Will it be a Repeat of September 2008 when Lehman went Burst?

The impact of a Greek default, or of a Greek exit from the Euro, wouldn’t simply fall on Greece and the folks to whom the government owes money. It would fall on markets, companies and institutions, near and far, that are connected to Greece, in some cases tangentially. A Greek default would almost certainly cause Cyprus to seek a huge bailout, for example.

Though seemingly complicated, this Greek drama is actually quite simple.

So How will Financial markets react on Greece election here are few Options which are Best/Worst for Markets.

BEST FOR THE MARKETS: A New Democracy win with enough Pasok support to gain 151 seats in parliament.

Both of these parties generally support the bailout and austerity measures, want to remain in the euro zone and are most likely to play well with others (namely the Germans). It’s ‘generally support’ because no one in Greece is terribly enthused about any of the harsh terms imposed by the so-called “troika” (European Commission, ECB, and IMF), but if these parties garner enough votes to form a ruling coalition it should greatly ease market uncertainty, at least for a while. Bank of America Merrill Lynch calls this a “very favorable outcome for US corporate credit as the probability of a disorderly Greek exit from the euro is significantly reduced.”

SLIGHTLY BETTER / STAYS THE SAME: A win by New Democracy yet without the 151 votes combined with Pasok to form a ruling coalition.

If New Democracy and Pasok can get close to the 151 seat total, they will work desperately with the other two more moderate parties, Democratic Left and Independent Greeks, to reach a deal that would effectively form a coalition. Though those two parties don’t support all the same austerity and economic measures as New Democracy and Pasok, there’s hope in the market that Greece’s increasingly desperate financial situation will force them to reach a deal, however distasteful to some of their followers.

BAD FOR MARKETS: A big win by Syriza

Bank of America Merrill Lynch called this outcome a potential “roller coaster” for the markets. Led by charismatic 37-year-old Alexis Tsipras, Syriza has literally come out of left-field as a new power player. Syriza is against austerity measures, and Tsipras has openly challenged European officials on them. If Syriza gets most of the popular vote, it will also push to make deals with other parties, most likely the Communists and Democratic Left, to attempt to form a ruling coalition that would take a hard line stance. That government would essentially be playing the single greatest game of economic poker the world has ever seen, and Angela Merkel and Mario Draghi may not be in the mood to play games.

3 thoughts on “Greece Election and Its Impact on Financial Markets”