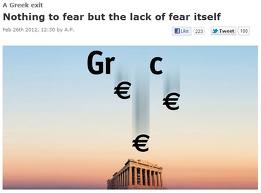 Of all the British newspapers, it’s probably safe to say that the FT most accurately reflects the way of thinking in Europe. It’s certainly not a euro-sceptic paper, so it has no vested interest in presenting things in a more negative light than is warranted.

So it’s striking that an editorial in this morning’s paper warns Greece that it’s on its own.

“The European Union (EU) has gone as far as it can in seeking to help Greece. If there is not the political will in Athens to do what is necessary to preserve membership of the euro, it is pointless to continue.

“Europe must prepare for an exit from the eurozone that has become probable rather than possible.”

Here’s the situation. In February, Greece agreed a €174bn bail-out deal with the EU and the International Monetary Fund. Part of the deal was that the country would undertake various reforms. These reforms need to be passed by the end of next month before Greece can get at the money.

Of course, the problem is that there is no Greek parliament right now. It looks like no one will be able to put together a coalition. As a result, there’d be a second election.

The country is fed up with austerity. And there are too many vested interests who don’t want the status quo to change. Alexis Tsipras, head of the second-placed Syriza party is playing a smart game. He’s standing up and denouncing “barbarous” austerity, and getting the people good and riled up for the second round of elections. If he plays it right, then this round of populist campaigning might even boost his support sufficiently to get in next time.

A Greek exit could be just what Europe needs

A Greek exit doesn’t need to be a disaster. If handled correctly, it could be just the thing that Europe needs to nail the crisis once and for all.

On the same day that Greece exits the euro, you let the ECB open the floodgates. The ECB promises to print what it needs to cap the yields on all European government debt, as long as member countries abide by the rules of their various reform packages.

It all comes down to how the Germans react. But if you throw Greece to the wolves to encourage the others, that should pacify the German voters’ thirst for perceived fair treatment.

Leaving the euro is definitely the best thing that could happen to Greece. A return to the drachma would allow the country to re-price itself rapidly. Ditching its debts would mean it could focus on growth.

And the country can continue to avoid reform and be run by insiders, for insiders, if that’s the sort of society it prefers, without being judged by its fellow Europeans.

Under this scenario, assuming the ECB money-printing was seen to be unlimited, then stocks would surge. The trashiest ones would surge the most. The euro wouldn’t do so well of course. But I suspect that the gains would offset the currency losses in the first instance.

And the gains won’t all be made in a day. So you don’t have to worry about positioning yourself for it right now. Just be aware of the possibility. And in any case, any other global stocks you hold just now, not to mention gold, would also be buoyed by an inflationary solution to the euro crisis.

Then again, it might also be a total disaster

Of course, that’s the optimistic view. What are the other options? Firstly, Greece could be allowed to stay in Europe and renegotiate its bailout deal. But even if that happens, it’s only a matter of time before it breaks down. Greece is in too deep a hole to repay its debts. So a renegotiation – unless it also involves wholesale money printing, in which case just refer back to the scenario above – would simply lead to more of the same, further down the line.

Secondly, Greece could leave, but without any proper backstop in place to prevent the chaos from spreading. If that happened, you’d likely see bond yields spike across Europe. Portugal would come under severe pressure, and Spain and Italy wouldn’t be far behind. Chances are banking stocks in particular, and shares in general would collapse.

That would almost certainly encourage some form of money printing by the Federal Reserve and the Bank of England. And the ECB might be allowed to follow suit if things got that drastic. But there’d also be a much greater chance of things spiralling to the point where the euro’s continued existence in any form would be questionable.

That’s one of those ‘too grim to contemplate’ outcomes. It makes me think that ultimately, the ECB printing is still the most likely option. But I’d be inclined to hold some cash in reserve so that you can take advantage when and if it happens, rather than piling in now.