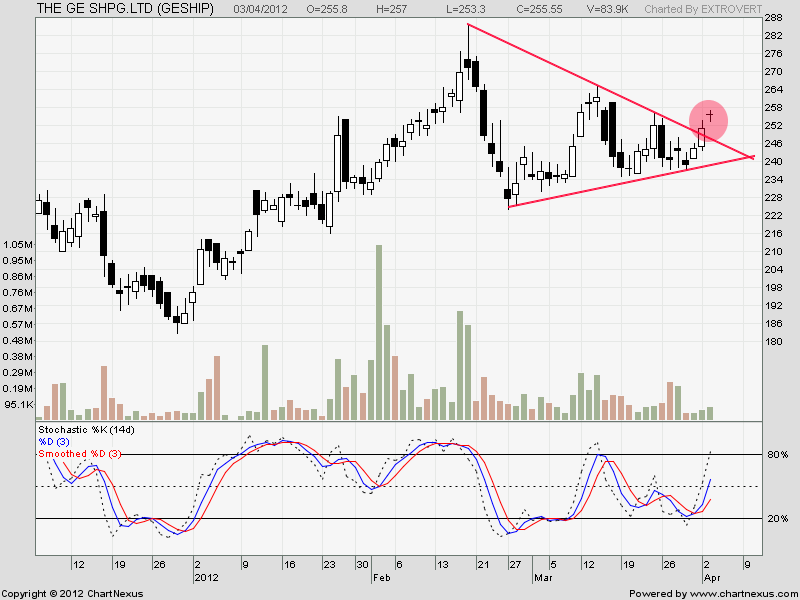 Some traders who have lost money fall into paralysis from analysis.They develop a quaint notion that if they analyze more data, they’ll stop losing and become winners. You can recognize them by their beautiful charts and shelves crammed with stock reports. They will show you indicator signals in the middle of any chart, but when you ask them what they will do at the right edge, they only mumble because they do not trade.Analysts are paid to be right; traders are paid to be profitable. Those are two different goals, calling for different temperaments.

A Trader can become an Analyst but an Analyst can never become a trader. GE Shipping has broken out of symmetrical triangle and closed above it for 2 days. Only concern is Volumes which is low after breakout also Ashok Leyland which we covered on FaceBook Page  which was a breakout candidate above 29.75 made a high of 32.5 yesterday which was near to our 3 tgt of 33.

Now Looking at Daily,Weekly and Monthly charts Ashok Leyland is highly overbought region . There is persistent negative divergence on Daily charts which make it prone for a fast pullback .

Weakness will creep in below once it starts trading below  31.15 and Bullish momentum will fade away on a trade below 30.9.