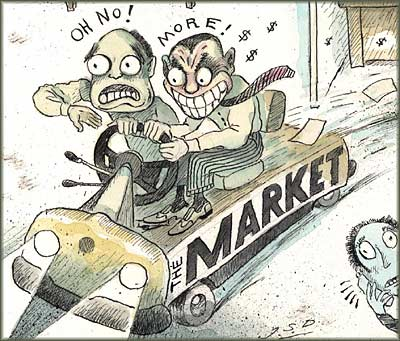 A compilation of Trading Quotes which will be helpful to control your emotions during trading. Read them Daily before markets starts Belive me it will helpful in removing the mental blockade which you experience during your trading.

An avaricious or keen desire for profits is one of the most prevalent causes of failure in speculation. This weakness is general among traders. They desire “just a little more ” profit. If the stock or commodity bought advances, then that’s proof to them that it will advance further and so they hang on. They usually overstay and thus miss their market. If they fail to obtain the top price and it reacts, then they assure or console themselves by the expression: “Oh, it will come back.” It may “come back” but often it does not, and instead, declines to below the purchase price and frequently results in a loss. The same observations apply to a short sale for a further anticipated decline. It is a good policy to be satisfied with a reasonable profit and be willing to leave some for the other fellow. The market is always there and other opportunities for making profits will present themselves while the greedy trader is waiting to get the last eighth.

Greed leads to disaster in another way. A speculator has started in to buy at the inception of a bull movement. He makes money. The more he makes, the more avaricious he becomes as the market moves forward. His confidence in himself increases until he develops a mental state known in the vernacular as “big head” or “swelled head”. He now has unbounded confidence in himself and “plays the limit”. Soon thereafter the market culminates at the top and the trend reverses, but Mr. Swelled Head is ignorant of this, so continues to buy on set-backs instead of selling on rallies. A drastic slump follows and Mr. B.H. goes to the scrap pile – BUSTED.

The rules are not hard to understand. Recognizing a profit from a loss is simple. If the rules are easy to grasp and a profit is distinguishable from a loss, where does the problem lie? What makes it so hard to apply the rules? There is something within each of us that has a power over our minds that prevents our acting according to what we have agreed is the proper course of action. That something is present in all of us and is very powerful, more powerful than anything I know. Let’s call it ego. Until we learn to get rid of our ego, we will never make money in the market consistently. Those who haven’t identified the ego’s ways will eventually be destroyed in the market because of their ego’s tendencies. It is just that powerful. The market rewards those who have subdued their egos. Those who rid themselves of their egos are rewarded greatly. They are the superstars of their fields. In the market, rewards come in the form of profits. In the world of art, masterpieces are the results. In sports, the players are all-stars and command enormous salaries. Every pursuit has its own manifestation of victory over the ego.

Discipline is directly related to the bottom line of a trader’s account. The Professional Trader keeps a high focus on being disciplined and sticking to his system. He disciplines himself by constantly having the thought of making money and being positive at the end of the month in the forefront of his mind. This way he keeps himself from getting caught in the now emotional moment. He stays on the sidelines when the timing is wrong to enter a trade and always places stops while trading. He moves his stops up as the market moves in his direction, acts as he is supposed to by seizing the right opportunities as they present themselves. He also stays within his risk to reward parameters. Professional Traders keep their priorities in order by keeping their primary objective of profit at the end of the month at the forefront of their minds. This make doing what they should be doing very easy. This discipline is the same as being in shape. If you have the desired body shape in mind then you will act accordingly while eating and exercising. Professional Traders approach trading the same way.

What is the biggest confidence killer to a trader?

The unrealistic expectation that every trade will be a winner. Let go of this artificial belief and accept that some losses are the cost of doing business. The tenet is to make a profit, and realize one losing trade is not the end of your portfolio. Letting go of this, and other unrealistic expectations, allows you to trade in a relaxed state. Your confidence will grow exponentially. A relaxed state means lower stress and the ability to make better decisions. Even highly competitive traders accept some trades will fail, and remain confident in their trading abilities

The losing traders have unrealistic expectations about the kind of profits they can make, typically shooting too high. They also debate with themselves before taking a trade, and even dwell on a trade well after it’s closed out. But the one big thing Williams noticed about this group was that they paid little attention to money management (i.e. defense).And the winners? This group has an intense focus on money management, and will voluntarily exit a trade if it’s not moving – even if it’s not losing money at that time! There is also very little internal dialogue about trade selection and trade management; this group just takes action instead of suffering analysis paralysis. Finally, the winning traders focused their attention on a small niche in the market or a few techniques, rather than trying to be able to do everything. Hopefully the second description fits you a little better, but if the first one seems a little too familiar, you now at least know how to start getting past that barrier.