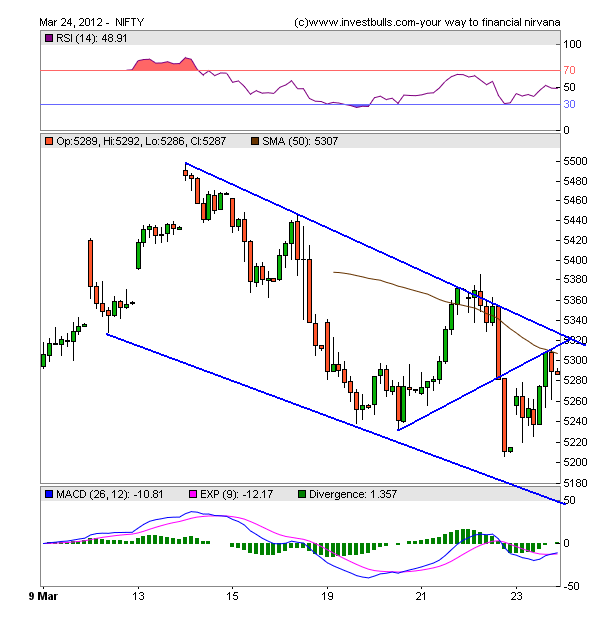 The following week we expected to be a trending week but again turned out to be a volatile week with daily range of Nifty of almost 100 points. We have march Expiry,Weekly and Monthly closing in the coming week which make in interesting both in term of data analysis and trading.

Lets see how technical are looking for the coming week. Hourly charts all gaps are filled till 5200 and 50 SMA@5307  proving a resistance for the current upmove which started on Friday.Close above 5320 will make the trend bullish for coming week as shown with trendline convergence Symmetrical  triangle formation on daily charts. Symmetrical triangle are continuation pattern and trend continues once the consolidation is over.Pattern become invalid on close below 5205. Breakout come above 5445. Nifty broke the 50 SMA on Thursday but closed above it on Friday which signifies strong hands are buying at bottom. Golden Cross is still valid till it do not break the swing low of 5171. As seen from the above chart 2012 looks bullish and base formation is going on. Nifty is still trading above the 14 months of breakout zone above 5130. Trendline resistance has come down to 5130.

We had a breakout above 5170 and now we are having the much required consolidation which would be healthy for further upmove of market.

Looks like till 5077 is not broken on closing basis Nifty bullish trend is intact and investor should look  for buying in dips the mid and large caps stocks. 50 SMA on Weekly charts @5227 has been protected on closing basis. Breaking 50 SMA on closing basis will be a bearish signal. As seen in above chart 50 SMA act as a potential resistance and support in both uptrend and downtrend. So 5227 act as important level for next week. Nifty has closed 5 Week in red,with a WoW loss of 0.7%. If we do data analysis its been clear Nifty is falling on declining volumes also the fall has been slow and with no momentum. March is generally know as volatile month as its quiet news driven. This whole month is spent in trading range of 5171-5499 with volatile moves both on upside and downside.

As pointed in above chart we are near supply zone and Dips should be bought into with a SL of 5171. Structure on Weekly charts looks bullish till 5217 is not broken on a closing basis. March closing is quarter end closing,window dressing and NAV prop up are the buzzword most of traders and analyst talks about. Look at above chart closely Candles marked with BLUE circle and March monthly candles. From past 3 years Nifty has closed march with gain of 3-9%.

So what could be the fate of this March ending. DII were net buyers on Friday in cash basically meaning game has started. So expecting the close March expiry on a positive note looking at above data. As of till date March month Nifty is down 2% .