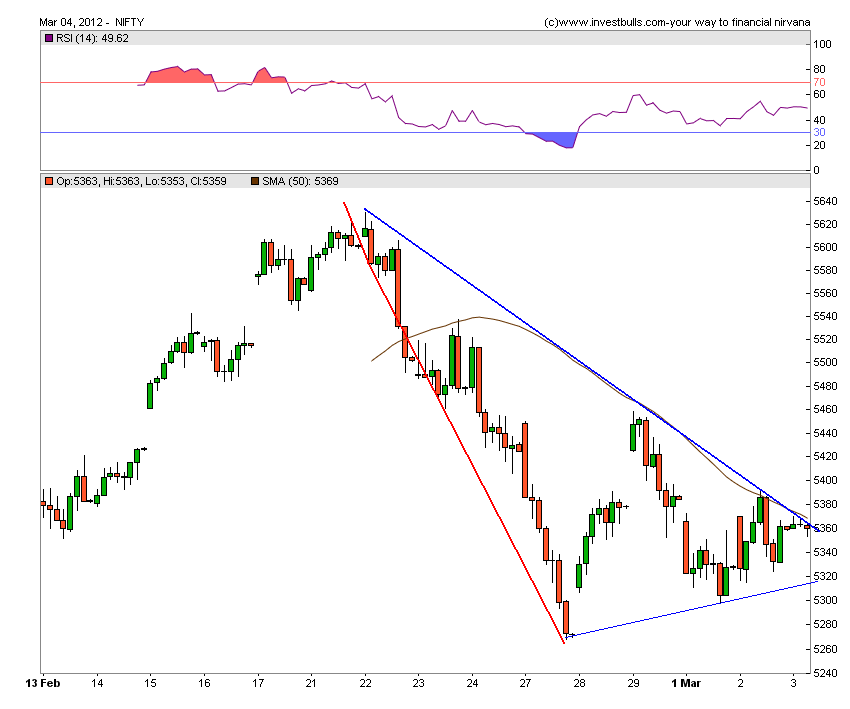 The Week gone by had bout of volatility with Nifty closing below 1.3% WoW basis. Last week market was a range bound volatile  moves  with loads of Intraday volatility. After Dull Jan and Feb months March promises to be a volatile month where money can be made on both sides. Its an eventful month with starting with UP,Punjab,Goa and Uttrakhand results. Most Important results to watch out are of UP election and this will provide further trigger to market.

The coming week has Holiday on 8 March on account of HOLI.

Lets see which color Holi is played on Dalal Street Will it be Green or Red ?

Exit Polls conducted by various news channel has given a Hung Assembly in UP. Can they be trusted. I bet not reason being lets have a look at Exit Poll results by various news agencies  in 2007 election and what turned out to be in reality

The final results were a surprise for all. The BSP virtually swept the polls with 206 seats. The SP bagged 97 seats and the BJP 51. The Congress scored the lowest with 22 seats.

So do not trust the Exit Polls results and wait patiently for 6 EOD to know the final outcome which if good will lead to a good rally in Indian markets. Lets analyses the coming week on technical grounds. On Hourly chart Nifty is forming a triangle pattern with a stiff resistance at 50 Hourly Moving average at 5375. Every attempt to move above 50 HSMA has been met with selling pressure. Close above 50 HSMA will add more fuel to rally.

As we had discussed in previous week  NF premium will come to normal level of 20-30 points and same happened this week. Irrational exuberance cannot remain for long. On Daily chart Nifty has strong support in range of 5220-50 as this is level where we broke out after 14 months of consolidation. So Dips around this level should be bought into. Last Week Nifty was trading in range of 5268-5392. But on following 4 days Nifty made a higher low of 5297,5306 and 5315. Which shows that lower levels have been bought into. Forming Higher lows is first sign of Bullishness, But for conformation we need to close above the higher end of range which if 5420 and coincidentally its 20 SMA. A big move will be seen this week with 5/20 Combo just about to do a crossover.Also we have formed a triangular pattern so we will soon be either at 5200 or at 5500 in next 1 week. So tighten your SL and get your mentally prepared for wild volatile moves. News driven markets are like High Tide in Sea. Fibonacci ratio of 38.2%  is at 5210 which should provide the support the market in any correction. Below it 5080 is last support for bulls. Weekly charts after 2Weeks of correction approaching the demand zone 5250-5235. On Weekly chart Weekly Up trending Channel has got broken and if it is unable to take support at 5220 we are in for a deeper correction. High Volumes Nodes are Resistance for the Rally above 5438 next resistance at 5477 than at 5520 above 5520 we are all set to break and make a new swing high as per volume profile.

I am Planning to Conduct  Session in Mumbai in a Group 5-10 People on How to trade Nifty Intraday/Positionally .Interested people can mail me@bhandaribrahmesh@gmail.com