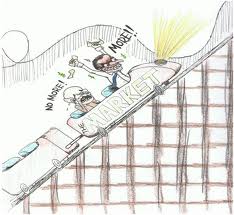 Nifty did a one way ride for Jan and Feb 2 weeks. One of the most spectacualr rally. These kinds of rallies have been coming and will be coming for next many many years. But important thing is were you part of this rally,If yes were you on right side ie. Long side.

Most of traders missed the rally or were shorting the whole rally Very few traders were able to milk this rally. What diffrent they have done.

They had Self Control and Discipline over them.

Cultivating discipline and self-control is vital for consistent and profitable trading. You implement proven trading strategies, over and over, so that across a series of trades, the strategies work enough to produce an overall profit. It’s like making shot after shot on the basketball court so as to accumulate a winning number of points. The more shots you take, the more likely you will amass points. But the winning player is the person who first develops the skill to make the shot consistently, so that at every possible opportunity, the ball is likely to go through the basket. To a great extent, consistency is the key. If the player uses one approach one time and a different approach at another time, performance is haphazard.

It’s the same for trading. One must trade consistently, following a specific trading plan on each and every single trade. This allows the law of averages to work in your favor, so that across the series of trades, you will make an overall profit. If you follow the plan sometimes and abandon it at other times, you throw off the probabilities. Suppose you used a strategy that had a track record of 60%. Under the best-case scenario, you could only expect to win 60% of the time. But since history doesn’t always repeat itself, it’s likely that you will win less than 60% of the time. If you don’t execute the trading strategy the same way each time, you will decrease your winning odds. And fewer winning trades may mean an overall loss. That’s why discipline and self-control are so important.

With discipline and self-control comes profitability.

Don’t let unjustified wins interfere with your ability to maintain discipline and self-control. Follow your trading plan, and reinforce the idea that if you follow your plan, you will end up with profits in the long run. If you abandon your trading plan, and get an unjustified win, you may feel good in the short term, but you’ll pay a long term price when it comes to your ability to maintain self-control.

Do You Trade The Market or Your Emotions?

As traders try to improve performance, the one piece of knowledge that is often overlooked, is self-knowledge. Most traders would benefit by simply focusing on doing more of what works and less of what doesn’t, which sounds obvious, but the reality is that most do just the opposite. Learning to identify which behaviors work and which don’t is not as fun or interesting as learning a new trading strategy or set-up.; and awareness of one’s internal state is just as critical, but that is typically not dealt with.  As a result, most traders focus outward and ignore their inner process. And the way this often plays out for a trader is they trade their emotions and not the market.

4 thoughts on “Self-Control and Discipline in Trading”