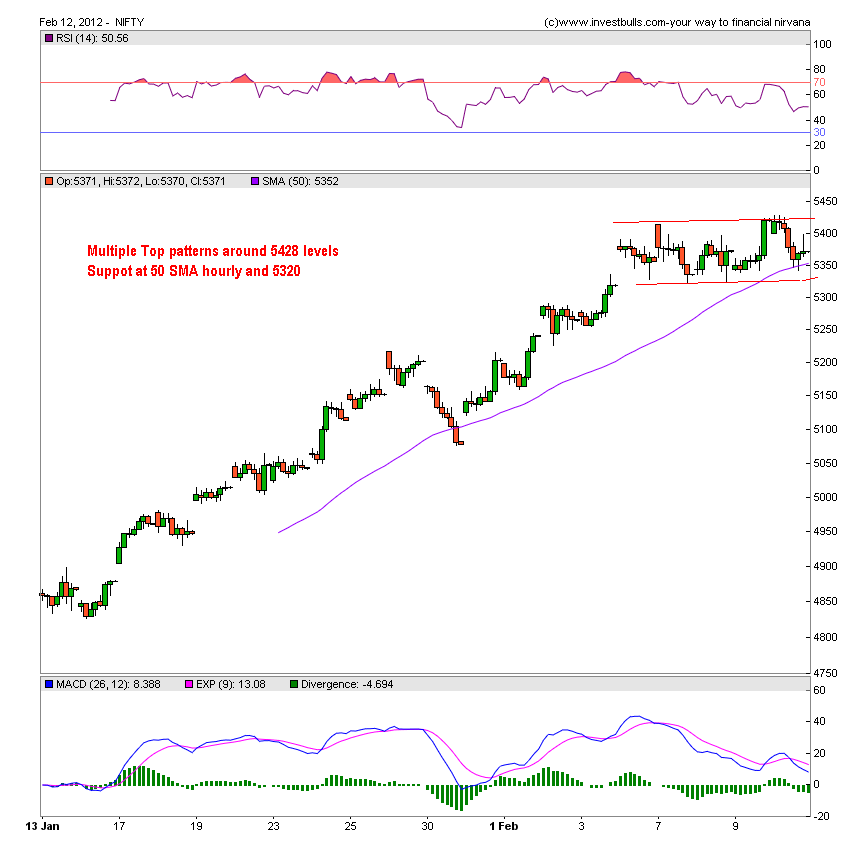 Nifty was up by 0.8% last week. Tepid Industrial Productivity (IIP) number at 1.8% in December as compared to November was a Shocker along with a revised GDP outlook of 6.9% as against 8.4% in the previous year were the reasons of rally spoilers for the last week.India’s trade deficit too has soared to uncomfortable levels of US$ 14.7 bn.

On International Front Greece drama was and will be in Limelight for the following week,Eurozone dismisses Greek budget deal and  holding back the Bailout fund setting 15 Feb as the dealing to Greece to come up with a solid plan worth implementing else Leave EURO zone.

Lets jump into technical of Nifty.

Nifty did obliged to us and made a high of 5428 for the last week and started correcting from 5428.

Now Million Dollar question is it a trend reversal or just a correction? Lets try to find answer about it. On Hourly charts Nifty is consolidating in the range of 5320-5428 with 50 Hourly moving average providing a good support.50 SMA Hourly stands at 5352 levels.

On Hourly charts shown above i have pointed all the 4 Gaps which have been left unfulfilled from the rise of 4640-428 on Nifty Spot. For a healthy rising markets such gaps needs to be filled as it can be considered as VOID left in a newly constructed building. Gaps will get filled in next down leg of Nifty most probably in February. On Daily charts Nifty has been trading in a parallel channel with topping out formation at 5413,5423 and 5428. Supply pressure is coming on upside. Every trending markets is followed by a Consolidation or sideways market.Now we had a rally from 15 days from 4675-5430 almost 20% rally now we had a 5 days of consolidation pattern from the range of 5320-5430. Best Strategy in consolidation market Buy near support Sell at resistance. Support at lower level comes at 5251 which was trendline breakout point and 5178 which is 200 DMA. Weekly charts after 5 week of rally 6week formed a DOJI pattern indicating slowing of momentum. Volumes for highest in recent weeks which can be a distribution pattern if unable to cross 5435 next week.

Also When we had the 14 weeks rally in 2009-10 we formed the similar DOJI pattern as marked in above chart and we had the fall in next week. Let see if History Repeat itself? Watchout for 5251 which was trendline breakout level on Weekly charts Breakout on Monthly charts and monthly close should be above 5251 Falling Wedge formation with trendline breakdown below 1326. To be in downward swing S&P 500 should break 1290 on closing basis. It has been 1 way ride for low of 1158 to 1351 without any significant correction. DAX is also trading in a parallel channel with high of 6829.DAX has also started its correction support exists at 6440

One more Request Many  Readers have asked me to send my post through there emails as soon as i publish the post.

I would request all the readers to register themselves to Feed burner .

How this can be done?

When you open site on your right hand side there is a Sidebar with heading Post in your mail Box.

Please register your email id and confirm the subscription with follow up mail in your INBOX.

Once confirmed as soon as post gets published will be delivered to your Inbox.