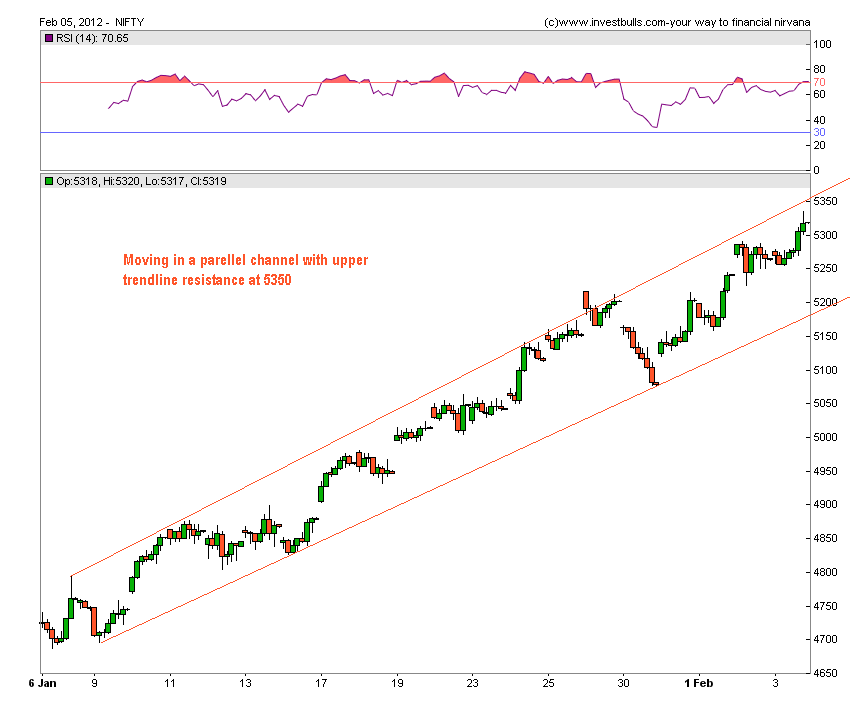 Nifty continued its dream run with another 2.3% upmove for the previous week. FII has bought equities worth 4691 cores on first 3 days on February, which lead to Nifty moving above the 200 DMA.

Are we out of Woods looking the the dollar inflow we saw I guess not as still MACRO problem persists. Core sector grew a tepid 3.1% in December, and credit offtake for calendar 2011 almost halved to 15.2%. On the positive side, the HSBC Purchasing Managers’ Index (PMI), a sentiment indicator, climbed to a seven-month high of 57.5 in January.

So now everybody is asking are we in Bull market or this is one of the sharp and swift bear market rally?

2.  200 SMA should trade below 50 SMA which is still not met.As shown in below chart 200 SMA is trading above 50 SMA.Condition Still not Met So from the above we can conclude still its early days to say we are in Bull market. On Hourly charts shown above i have pointed all the 4 Gaps which have been left unfulfilled from the rise of 4640-5326 on Nifty Spot. For a healthy rising markets such gaps needs to be filled as it can be considered as VOID left in a newly constructed building. Gaps will get filled in next downleg of Nifty most probably in February. Nifty did a breakout out of 14 months channel which is a bullish signs and much talked about . When a particular things comes in public knowledge markets do give a whipsaws to trap traders . So we will look for confirmation with a weekly closing above breakout level of 5250. Indicators can remain oversold for extended period of time Check the above chart.  Wait for Price to show weakness before taking any short trade.

Do not be courageous to take shorts without any confirmation . Either be with trend or stay out of market. Breakout in Weekly charts as we discussed in last week analysis. 5450 and 5555 are the next level of resistance on weekly charts.Volumes are highest in preceding weeks signifying the breakout backed by volumes.