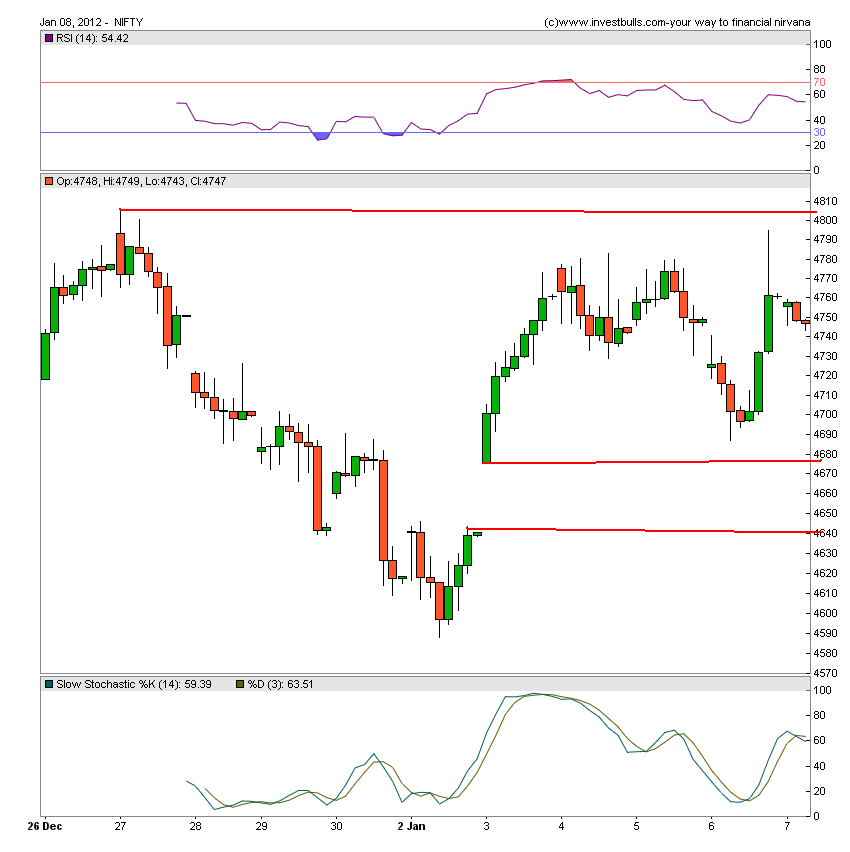 The Opening Week of New year 2012 was won by Bulls as Nifty closed up by 2% in a range bound and dramatic closing of week as market was open on Saturday also.

Another Interesting aspect for this week gone by was Food Inflation which dipped in negative but it failed to cheer markets nor Policy maker and surprised the common public.Normal Households food budget has doubled from past 1 year but as per Government data  food inflation is negative. How is tht possible?

Food Inflation dropped is more because of High base effect we were having in past 1 year so its a mere statistical representation of year-on-year movement in prices of select items.

Fuel prices (especially LPG) that materially impact household consumption budgets, remain a contentious issue. Hence, it is too early to celebrate the decline in food inflation numbers. RBI cutting rates on this number will be a wishful thinking.

Coming Week will be quiet exciting in term of news flow data as Infy the IT bellwether will be declaring its results of 12 and IIP data will also be coming on 12 Jan.So expect a breakout either above 4800 or breakdown below 4690. Past 4 days having been in a tight range. Nifty made almost 6 attempts  to break 4780 level where BULLs were overpowered by BEARS, but BULLS did not let the break of 4676 level and start the gap filling process.  So as such its a tight rope game which was played. The above charts depecits the tight range Nifty has been trading on past 4 trading session after the rally on 3 Jan. Market did not do anything and preparing base for next move which should be fast and furious. 4800 above breakout and 4676 below breakdown On Daily charts falling wedge pattern is forming which is a bullish pattern. Nifty has been closing above 20 SMA for 5 days now which makes the technical structure of market strong and a base formation by bulls. Above 20 SMA next target comes to 50 SMA@4910. Stoch and RSI will be approaching there overbought levels with Nifty coming near 4900 so time to book some profits on longs near 4881-4900 levels. Fast rise setup is forming on daily charts, I have marked the previous fast fall and rise pattern in above chart. Its a good set up to know in advance the trending nature of Nifty. On Weekly chart Nifty closed above 5 EMA@4748 after 4 weeks. Close above 5 EMA signify selling pressure has come down and accumulation on lower levels. To add with have a good positive divergence on indicators.Break above 4800 will lead to divergence to show effect. On Monthly chart the formation of lower lows had stopped, trendline resistance comes at 4880 on monthly charts.

4880-4900 should be good level to do profit booking for longs held by positional traders.