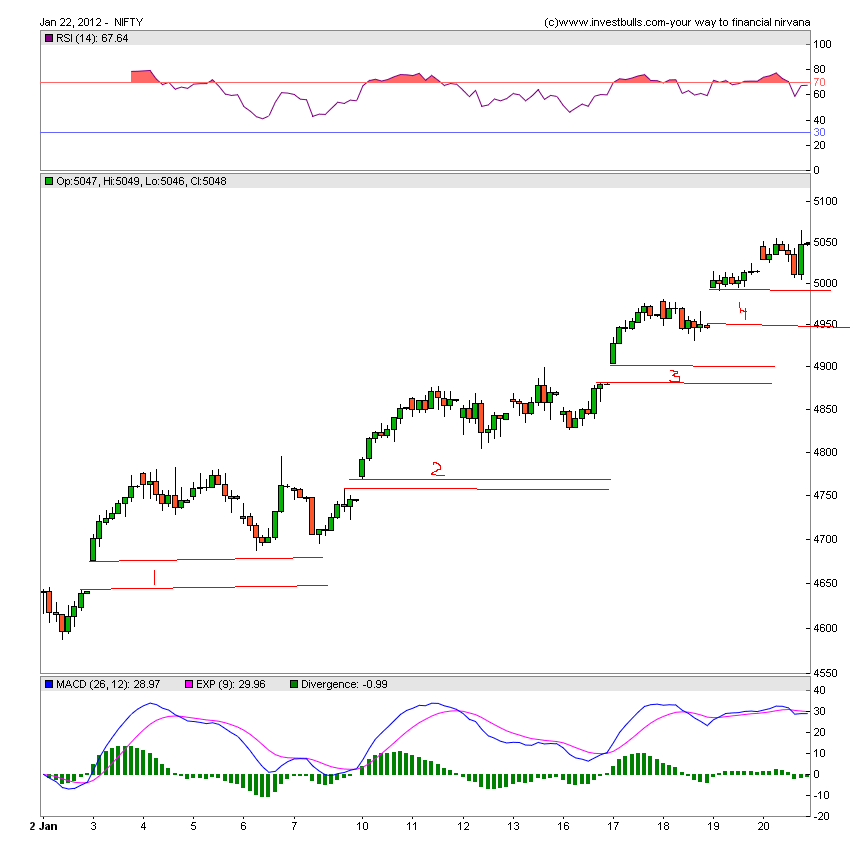 2012 started with a bearish noises all around and traders shorting stocks index on every rise. Investors were not deploying cash thinking of getting stocks at more lower levels. But market always move against the mass psychology and its Proved TRUE yes again.

Nifty is up 9.2% in January 2012 Till date.In fact, this is best performance in January Month in last 10 years :). The rise is driven by FII Funds Flows and anticipation of RBI easing rates after monetary tightening cycles of past 2 years . RBI meet is on 24 Jan

Lets move to Technical of Nifty for coming Week. Last week we discussed Nifty not breaking 4804 is bound to move up and same happened this week with Nifty moving up by 3.8%. On Hourly charts shown above i have pointed all the 4 Gaps which have been left unfulfilled from the rise of 4640-5064 on Nifty Spot. For a healthy rising markets such gaps needs to be filled as it can be considered as VOID left in a newly constructed building. Gaps will get filled in next downleg of Nifty Rising Wedge has been spotted on daily charts.Rising Wedge are bearish in nature and again we need a confirmation with price breaking below 4995 on closing basis. Till than the trend will remain bullsih Fibonacci Retracement from high of 5400 and Low of 4532 is drawn in above chart.61.8% retracement  comes at 5067. Nifty spot high is at 5064 on friday. Look at Volume bar on Friday. Volumes are way above average so it signify 2 things.

I am considering Friday Volume as per VSA thoery  HIGH VOLUME NARROW SPREAD UP BAR Smart money selling and signs of distribution at higher levels, Monday price action will confirm the trend. On Weekly charts Nifty support lies at 4827 now . Nifty is approaching cluster of resistance zone between 5100-5170.

Always remmber Higher Time frame will gain importance in a trending market so for example Nifty is Overbought in Hourly and Daily charts But look at weekly charts the trend is up and Weekly Stoch is in middle zone.So Nifty can still manage to go up till weekly trend is up.

Why am Highlighting the time frame concept as many traders short nifty blindly looking at overbought on Daily and Hourly charts and end up being in loss. On Montly chart next major resistance comes at 5100 which was Dec Month High.