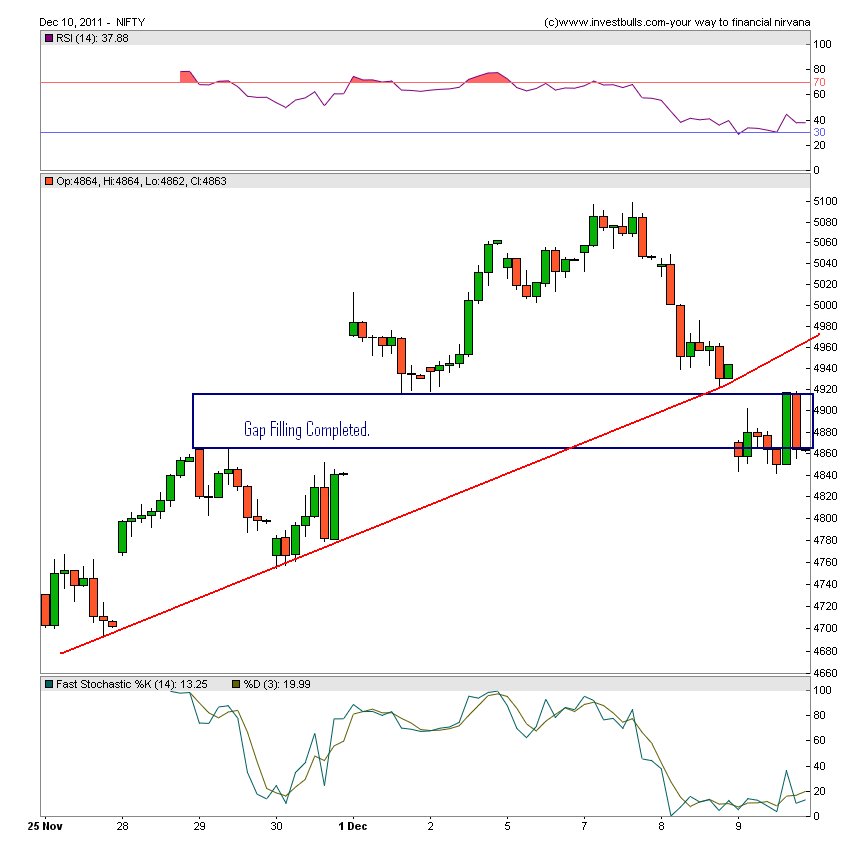 Nifty was  down 3.8% during the week after the government lowered the full year Gross Domestic Product (GDP) growth target below 8% worst in past 4 years also acknowledged that meeting the fiscal target would also prove to be a challenge and it will get to atleast 5.4% instead of 4.5%.

The deepening debt crisis in Europe and the lack of solution thereof, rising inflation and slowdown in growth in India and policy paralysis in the government have spooked stock markets and contributed to the increasing volatility.

We have slew of economic data next week with IIP DATA on Monday,Monthly Inflation data on Wednesday and RBI Quarterly review on Friday, these data will keep market on it toes and volatility will be the name of game.

1. Nifty Trend deciding level 5020 and below it Nifty went 178 points lower as soon as it starts trading below it. On Hourly chart as seen above NIfty has filled the gap till 4842 bounced till 4918 which lead to filling of opening gap down also. So in all Gaps are filled in Nifty.

If we draw a trendline 4720 marked in red in above chart we see the resistance coming in the range of 4960 range. So if on Monday markets open gap up we need to watch 4960,below which markets are sell on RISE. On Daily charts NIfty is trading in a wide channel as shown in above chart break of 4639 will invalidate the double bottom scenario and lead to much sharper cut in Nifty till 4450 as per trendlines. On Daily chart nifty just broke out of daily channel and it corrected by almost 259 points in 2 days, the quantum and steepness of fall was fast and furious. 4808-13 has provided support to Nifty in all previous fall so any downfall should be  provided support in this range.

So is the correction over or just the trailer ? One more chart to support our views on correction is 5 EMA and 21 SMA Combo. This system is precursor of fall which is coming in market. As i have marked with circle the previous every croover has lead to waterfall decline in Nifty.

5 and 21 are about to do crossover has started crossing on downside and if it happens on Monday we are in fall deeper fall this time and 4450 will become a reality as soon as 4639 gets broken on closing basis. 61.8% retracement again played its role,Nifty made a top and 5100 and corrected.23.6% comes at 4818 which as per daily charts will provide the last support to nifty. On Upside ressitance will come at 4942 and 4972 which is again in sync with hourly trendline chart as discussed above. On Weekly chart Nifty has broken the weekly trendily by closing below 4900. Another week close below 4900 will lead to break of 4639 first and we have all important support at 4560. Om Monthly chart break of 4841 will lead to break of multimonth trendline at 4841, will again be bearish on markets. Above S&P 500 chart shows the resistance at 200 DMA. Developing markets have outperformed the EM.

1260-65  is an important resistance for S&P as its multimonth trendline and 200 DMA,failing to cross will lead to break till 1216 in S&P as Stoch is on verge of giving sell signal.

Close below 4675 will lead to 10% correction in Nifty as discussed previously. (Click on Link to visit the article)

Comments and Suggestion are welcome.