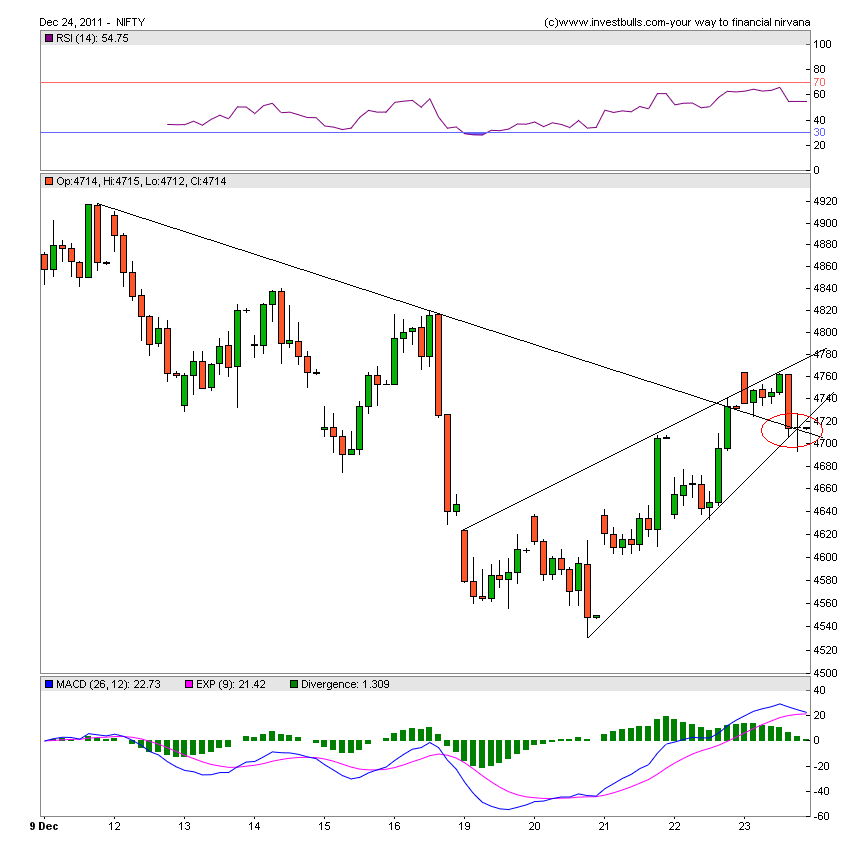 It’s Christmas Eve today and we are almost reaching the close of 2011. From India’s perceptive 2011 is the year everyone wants to forget as it was primarily characterized by  prolonged bear market, economic slump,inflation,corruption scams and weak rupee.

Will things change in 2012 for India and World’s Perceptive?

In India a State Level election poll will keep the governments busy in wooing people  to vote for them and expect policy log jam at center for the time being. From Stock Market perceptive  Inflation is showing moderation Food Inflation at 3 Years Low, but 13 rate hikes have put the brakes on economic growth. It will take a while before the growth engine starts chugging along at full steam. Stock Markets takes the cues in advance and price in both good and bad news well in advance.

Lets jump into the technical of Nifty for last trading week of 2011. On Personal front i expect it to close on a Strong note looking at History of December month on account of Increasing fund flow for US markets,value buying by Indian  Mutual funds and Quarter ending   so NAV adjustment by MF and Hedge funds. Nifty on Hourly chart was able to close above the hourly trendline support of 4700 which is bullish in extremely short term. Nifty if able to protect 4660 on downside we can expect a bullish expiry next week. I do not expect the break of 4531 as per data analysis and chart formation.Click on below link to read more about the analysis

Has Nifty made bottom in December Series On Daily chart Nifty took support at much anticipated levels of 4531 as shown in above chart and we saw the much awaited pullback. Next level of resistance comes at 4840 which was the breakdown level towards the low of 4531.Till Higher Highs formation on daily charts is not broken the pullback can extend to expiry week.

Volumes of the pullback are on lower end which has been the characteristics of  previous pullback. Volumes of NF last Friday were lowest in the December series. A peculiar characteristic of 2011 bear market is Nifty making wild moves but it trades within a channel  and identifying the correct channel is Key to success in NF trading. On Weekly chart Nifty was up just 1.3% after a waterfall decline of 7.3% is past 2 weeks.If you see Weekly charts closely week after which Nifty makes a panic low Nifty is up in the range of 2-7% in immediate next week.

So which give us one more evidence of Nifty can try to make a pullback in coming Week and end 2011 of a strong note. On Monthly chart Nifty is down 2.4% but still trading below the broken multimonth trendline. We have 5 days before the end of 2011 and close above 4840 will make Nifty comes back into the trendline channel

RSI and Stoch are oversold on Monthly charts. The most Widely tracked market in the World S&P 500 has atlast broken its 200 DMA which is highly bullish. Also it broke trendline which is bullish signal. S&P is jsut 40 points aways from its August high of 1307 .

Aug was the month when S&P has downgraded the US Market so closing above this 1307 will make the effect of rating downgrade nullified.