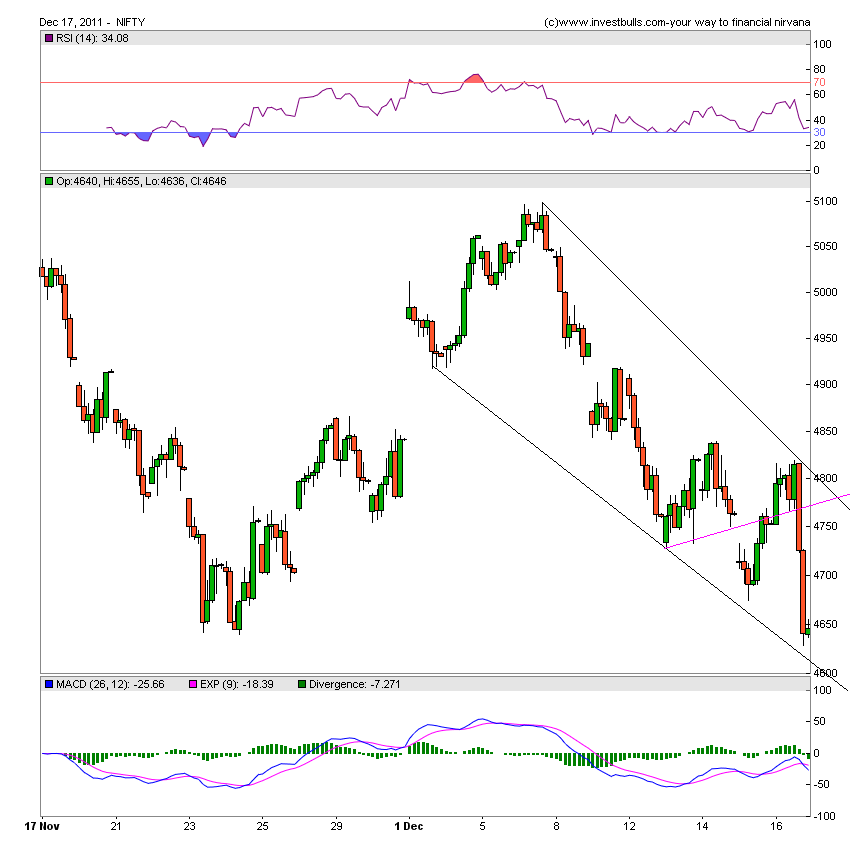 If you have to panic, panic early because in market eventually everyone panics.

Reason: The pain just becomes unbearable and the fear of unknown forces one to get panicked.

Looking at the waterfall decline on Friday sessions the screen is just telling me that may be that’s what seems to be happening as Nifty made a new 52 week low and closed below 4675 which was 2010 low. On Hourly charts Nifty sold of 200 points in matter of 90 mins which is quiet surprising and disappointing close.RBI has kept rates on Hold and INR came down sharply from highs of 54 but nifty choose to make a new 52 week low. Technical structure of market has been considerably weaken after yesterdays close and took many people by surprise the intensity and rapidity of fall.

But as Traders you should be prepared for such events and Sl and proper trade plan will eventually make you winner.

As per hourly charts till close is above 4771 we are in downtrend and rallied should be used to short the market. On Daily charts the trendline bottom comes near 4530 which we can see a sharp bounce but as only 9 days are left for december expiry i would suggest to be caution on long trades and do not jump into market. It showed it effect with nifty unable to cross above 4941 and making anew low of 4628.

Global Downgrades by Fitch and Moody’s can add to global pain across equity markets.

Week on Week Basis Nifty was down 4.5% and has closed below important trendline support of 4840. next zone of support comes at 4575,4530 as per weekly trendlines. Next Week will be another trendling week for market reason being FII will go on holidays before 24 Dec so they would be in hurry to square off there positions in Future and Option so next week will be full of volatile moves. Unable to close of 4675 on next week 2-3 days will eventual lead to decline till 4350. One more interesting observation Nifty has closed below its 200 SMA@4771 on weekly basis which happened in 2008 and we had a crash in market. Will the History repeat ?

Nifty has broken the Monthly trendline which is again a bearish sign and trendline targets comes at 4530 as shown in above chart.