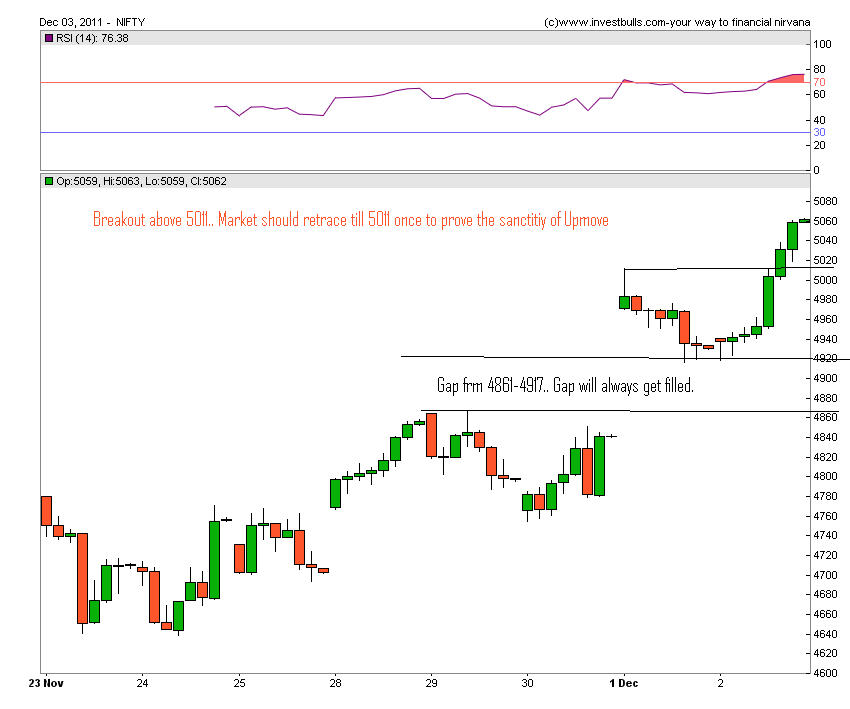 Nifty was  up 7.3%  during the week after 4 weeks of consecutive loss taking cues from the global stock markets. Revival in foreign fund flows and bargain hunting at lower levels drove markets higher. It would be interesting to see how the next week pans out lets see how we are technically positioned for trade next week.

We have trading Holiday on Tuesday so expect  Monday to be a highly volatile day as Traders will book profits on Longs and cover losses on shorts as overnight positions should not be carried in such highly volatile times we have seen 2 gap up of 100+ points in last months.

One Important observation i would like to discuss is Government/Central bank bailouts can never work on a longer term basis they can pop the markets for 1-2 weeks but after that once the enthusiasm settles into and market participants are aware of ground realities the demand and supply will take market near to its fair value. On Hourly charts we have a shown breakout on Friday above 5011 and moved towards the resistance zone of 5060-5110. Next week this range will be crucial to decide further trend of market.

We have a gap remaining at 4917-4861 which should be filled in due course of time. Looking at hourly charts in overbought conditions a consolidation correction can be expected towards 5011 and 4970. Nifty rose 100 Points on friday but the volumes were below average which suggests rally was based mostly on short covering and buying is not happening.

One typical characteristics of Bear market rallies is they are always backed by lower volumes and falls by a larger volumes. 5062 was the trendline resistance as per above chart and Nifty respected the trendline now move above 5062 will lead us to 5110 and 5169. Nifty has finally closed above 50 DMA, To strengthen our view that move above 50 SMA was not a whipsaw market needs to close over it for coming week.

Ideal Scenario will be Nifty moving towards 5110 than consolidating giving a correction till 50 SMA and than finally starting its journey towards 5355 which is 200 SMA.

Inversely Nifty can move below 5022 and fall till 4861 to fill the gap so holding above 5022 will decide the further trend of next week and December expiry also. Nifty is up 7.2% WoW basis after 4 weeks of consecutive losses and one of the best weekly closing in past 2 years, Volumes were below average on the back of such massive rise indicating it was mostly on back of short covering we had such an humungous rally. 5 Week high EMA is at 5109 which again adds to our view that 5110 should be the tough resistance for Nifty to break. 5110 would be resistance for next week and close above it on Weekly closing basis will lead us back to 200 SMA@5355. On Monthly charts Nifty was able to hold 4833 on Monthly closing basis which is one of the reason for the current rally on Nifty. For December Month Low is 4916, Above this level Bulls are safe and below it bear will come back with a bang. As per Yearly chart we are again seeing a formation of Double Bottom with 2011 Low 4640 and 2010 Low 4675. Will this level Hold for remaining next 19 trading sessions for the Year 2011 will be interesting to see looking at Euro Crisis and worsening shape of Indian Economy.