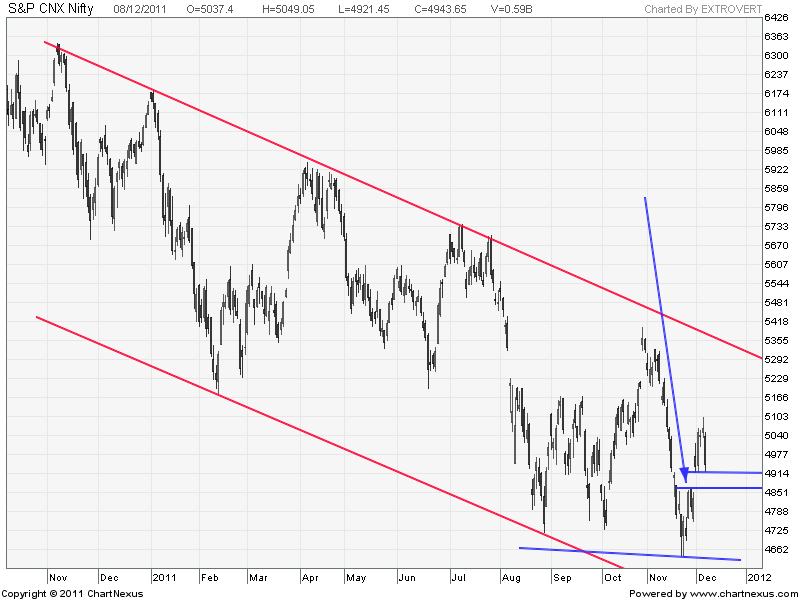 1. Indian FM comments that Fiscal defcit is way out of control

2. Paralyses of Govt at Delhi with economic reforms coming to standstill

4. Comments from Deputy RBI governor that CRR cut is not on cards.

Fundamentally Indian Economy is not at all in good positions and same is reflected in stock markets. On Daily chart we have a Gap between4916-4851 which will be filled today as SGX (http://sgxrtchart.blogspot.com/)is trading at 4881. Gap filling will be done by gap down.

Going by Classic TA theory we have stopped formation of  Higher Highs and started forming lower lows signifying bears have controlled the market.  The thrust of downmove can be attributed by fact it took 4 days for Nifty to go from 4916-5099 which got broken in single session.

Also we had sell off at 61.8% retracement which again indicates more lower levels ie. breaking of 4640 can be seen as soon as 4850 breaks on closing basis. We have broken the upper channel yesterday which means the current upmove is over ie. from 4639-5099 and we have started a new downmove starting yesterday. Till lower lows are getting formed do not think of taking longs in market on positional basis. Nifty yesterday had broken both 50 SMA and 20 SMA which also shows market have stalled the uptrend and now in process of correction. Bear market rallies are sharp swift and accompanied by lower volumes.

The primary trend is still down and short term trend also turned down with close below both 20 and 50 SMA. Today will be the weekly closing close below 4864 will turn weekly also in downtrend and we will see the revisit of 4640 if 4864 is broken on closing basis.

For today’s trading FII SAR comes at 4881 below which more pain.