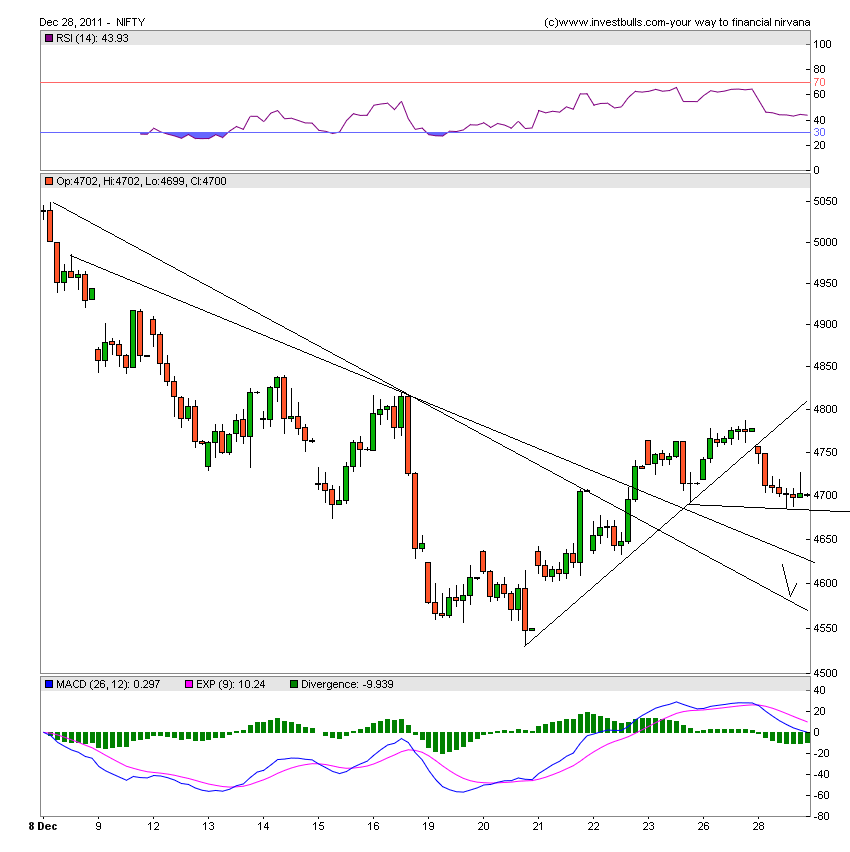 2011 came to an end on dismal note with Sensex recorded its second worst performance in the last 14 years, second only to 2008 .BSE and Nifty is down 24%  making it one of the worst performers in the global stock markets.  The real pain is in DEFTY ie. Nifty is Dollar term which is down 43% attributing to the Rise in INR of 19%. Foregin investor have seen there portfolio value eroding by 43% which has left a deep black hole in there pockets.

I am a firm believer of History and Chart pattern repeat itself .2012 being a leap year which as per history is not good for Stock Market

Leap years are generally not so good for the markets if you see the years 1992,1996, 2000, 2008 all of them have been leap years which are the years where major corrections have happened in Stock Market.

So time to be cautious as per Historical data from past 20 years on Financial market. Hourly charts are looking extremly weak as Nifty broke and close below the important support area of 4650. Volumes were less on the day when nifty broke below 4650 so it can be considered as whipsaw if Nifty on Monday closes above 4650 F&O turnover was just 65K cores.

For this downtrend to get over Nifty needs to close above 4725 level as shown in red trendline in above chart. On daily chart Nifty is approaching the all important support level of 4531.  January as such have been a crucial month as 2011 Jan Nifty crashed 11%, 2008 Jan we had the panic fall of 25% in 2 days. So January are always exciting month and huge and wild swings are inheritant.

2. Nifty reaches near 4531 forms a double bottom and rallies

I will give more possibility to 1-2 scenario looking at bearish pessimism all around.

As i always say for trader only 1 thing is Important TRDING LEVELS baki sab bakwas. Nifty has entered into a downward facing channel with formation of lower lows. Till lower low formation do not gets invalidated and Nifty remains in downward channel weakness will persist is market.

Channel Breakout of upside comes above 4725,Positional Shorts can use 4725 as SL for Shorts created at higher levels. Weekly chart break below 4608 will increase the probability of  breaking the 2011 Low of 4531 and making new low@ 4430 which is trendline target. Positive divergence is present on MACD (not shown in above chart)  to show its effect Nifty needs to trade above 4725.