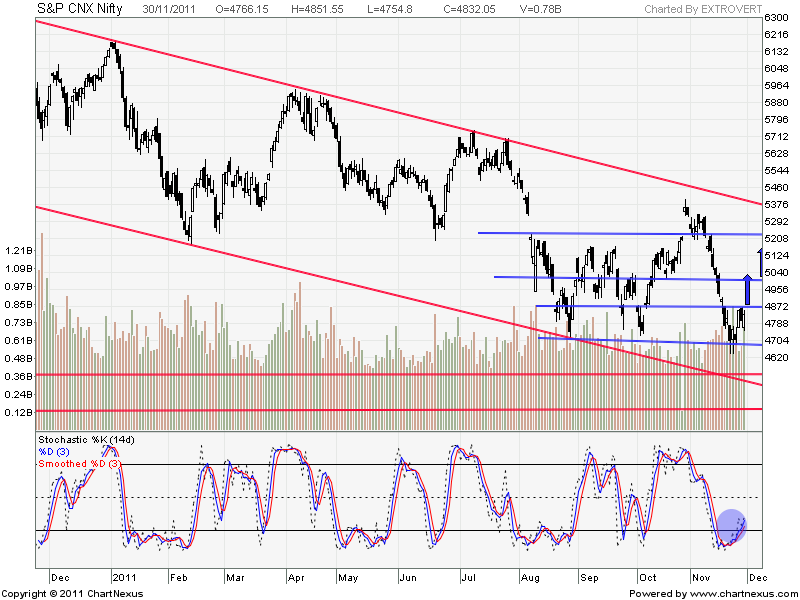 The central banks of Europe, the U.S., Britain, Canada, Japan and Switzerland eased banks’ access to dollars by reducing their borrowing rates. They were responding to fears that a European country will default, touching off a credit crunch similar to what followed the 2008 collapse of Lehman Brothers.

The central banks’ action takes some pressure off the financial system, which has signaled in recent days that banks are losing faith in their trading partners. Banks need to trust each other to maintain healthy flows of credit and keep the system working.

Global Market are rallying and Nifty as per SGX (http://sgxrtchart.blogspot.com/)is trading at 5002. As per Daily chart we discussed yesterday close above 4833 is very important level for December month.Yesterday Nifty closed above 4832 just a border line.

Nifty closed above 4800 for 3 days in a row which shows Buying coming on lower side and with sentiments bearish all around make its ripe condition for rally.

As I always say Charts discounts everything News are discounted by charts and same is proving true today also as Nifty closed above 4800 and 4833 it gave a very bullish signal. Should we Short today?

6 thoughts on “Nifty Bulls back in action ?”