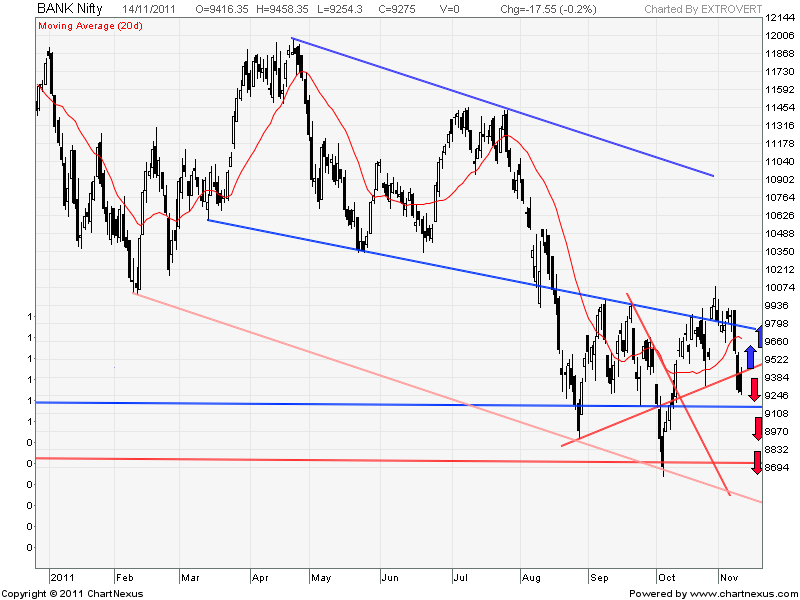 “I know it may sound strange to many readers, but there is an inverse relationship between analysis and trading results. More analysis or being able to make distinctions in the market’s behavior will not produce better trading results. There are many traders who find themselves caught in this exasperating loop, thinking that more or better analysis is going to give them the confidence they need to do what needs to be done to achieve success.” – Mark Douglas Bank Nifty has been under weakness from last week after SBI announced its results. Banks are under pressure coz of slowing economy because of rising interest rates which increase the bad loans.

Bank Nifty is at its crucial support of 9254. Break of same will lead to directly to 9152.

Technically things looks overdone for short term and bounce can be expected in bank nifty if it start trading above 9329. Both Bottomline and Topline number were good but the catch was in Non Performing assets.It increased to whopping 33% which has lead to sell off in the stock.

Stock has corrected from 2017 to 1740 odd levels. In turn broken important support level of 1860 and 1804. If stock continues with its downtrend trendline target comes at 1708.

I except sharp reversal in SBI  as it approaches 1704. ICICI Bank has been taking support at downward falling trendline, Stock is not going below 812 levels which is an important support in short term support for the stock.

Closing below 812 and breaking it on closing basis will lead to 761 levels which is swing low for ICCI Bank .