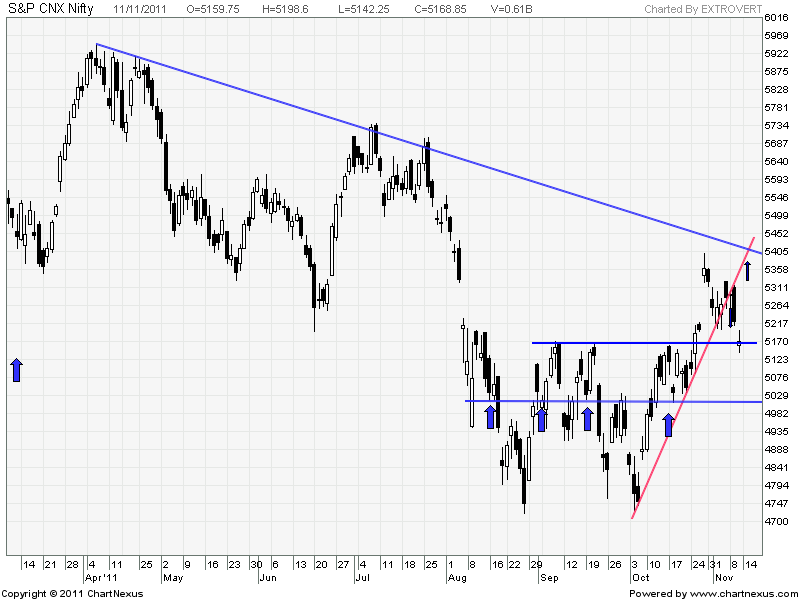 Discipline – Majority of traders are not disciplined in their approach, else they would not be failing. These failed traders simply hate to hear the word Discipline! As Jack Schwager points out in his book, ‘The New Market Wizards’, “Discipline was probably the most frequent word used by the exceptional traders that I interviewed. Often it was mentioned in an almost apologetic tone: ‘I know you’ve heard this a million times before, but believe me, it’s really important’.”

Site is given a new Look Do let me know your feedback on it. It will help in improving the Site UI and content further.IF you are unable to see in Mozilla FF please clear your cache. On Hourly charts Nifty after Opening Gap down at 5158 made an attempt to fill the gap but got resisted at 5198.

Gap between 5212-5198 remains to be filled and mostly should be filled on Monday. On Daily charts Nifty made a low of 5142 on Friday but was able to close at its breakout level of 5169 which keeps the Bullish hope alive as Closing at 5169 indicates strength in the market. Gap till 5198-5212 also needs to be filled.

Resistance on Upside will come at 5252-56 levels as these were the support before Nifty sold of in last 1 hour of trade on Tuesday. Trading Concept:After every trending market we will have  trading market where market will frustrate traders by trading in a range for some time before giving a breakout on upside or downside.

Consider the above chart Nifty had a one sided rally from 4728-5400 in matter of 17 trading days. After such a big rally Nifty wants a breather but it should not be understood as correction.

Nifty will consolidate in a range of 100-150 points for atleast 5-10 trading days before giving a final breakout.

I have mentioned 2 scenarios in above chart where market rallied consolidated and finally broke on downside.

Currently Nifty if it keeps the low of 5142 next week we will enter a trading range of 5400-5142 which is 258 point range and i expect Nifty to trade in this range and make one more attempt towards 200 DMA. On Weekly charts as discussed in last week we had an inside day formation and Nifty below 5326 or 5200 should give at least 50 points move. Nifty did moves below 5200 but with gap down. On Monthly charts Nifty took support at 5142 which is lower end of trendline which again adds to confirmation that Nifty has strength and buying is emerging on lower levels which qualifies for Buy on Dips scenario.

Few of Readers have complained about a Virus alert coming while Opening Site which should be ignored as its Iframe error which is coming, I am working on it to get it resolved