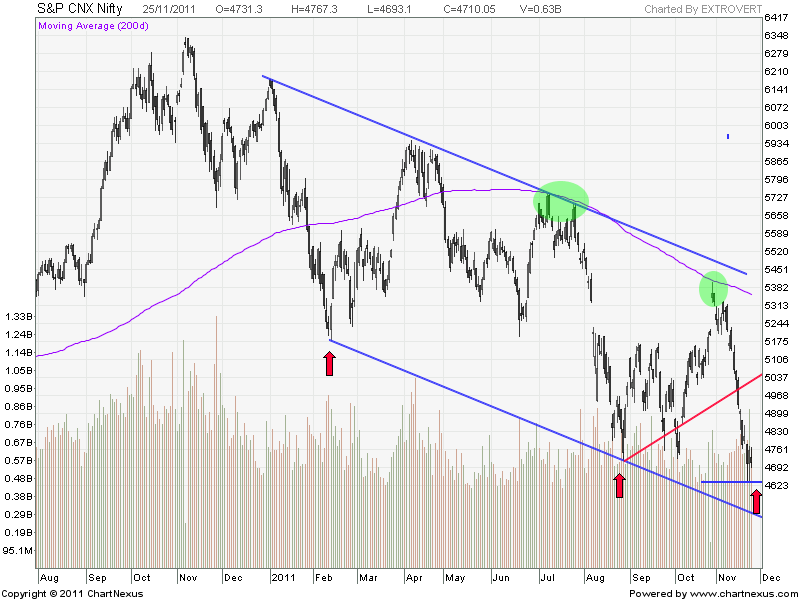 As per Weekly Technical Analysis for 9 November (Click on Link) we have discussed the possibility of heading back to 4720 and breaking the levels again with a simple Logic of 200 and 50 DMA. You can read the full post by clicking on above link.

Trading with MACD(Click on the Link) Nifty Hourly charts are showing pattern of consolidation after waterfall decline we have witnessed and traded in last 10 trading days. Upside will be seen above 4768 to the upper end of trendline between 4855 on downside break of 4640 will lead to cluster of support zones till 4550 levels.

After we have such a waterfall decline there are 2 Scenario possible:

2. After 2 days of breather Nifty continues with its downward journey as Weekly and Monthly chart patten suggest more downside in December. Nifty daily has been moving in a parallel channel as shown in above chart.

Break of channel above 4768-71 will lead to formation of higher highs and slow down the downward momentum.  On daily chart we have formed an INSIDE DAY candle which signify a trending move in offset on Monday above 4771 or breakdown below 4693. We have formed a double bottom formation on Daily charts with Nifty taking support at 4640 twice in 2 trading days which is powerful pattern for trend reversal. Nifty now should break 4771 on Upside on Monday for further upmove. Still Lower highs are formed on daily charts. Lower end of trendline comes at 4522 on Daily charts.


Indicators are Highly oversold but in trending market Indicators can remain overbought and oversold for extended period of time. 4 Week in row Nifty has been down which show the gravity of situation around the world.There have been selling spree from FII leading to 11.6% decline in November month and 4 weeks of decline.

Nifty is down 4% WoW basis. Nifty closed below 4837 on Weekly charts which is bearish in short term. On Monthly Chart Nifty broke the Multi-Month trendline with a close at 4837. We still have 3 more days before the month closing and Bulls need to close Nifty above 4837 to save Nifty for further decline in December month. Nifty Yearly charts we have an Interesting observation

In Jan 2008 Nifty broke the 2007 Low and after the lead to decline of 37%  in 2008. Now if we break 4675 on closing basis December month another waterfall decline can come as per above Observation so watch 4675 level closely.