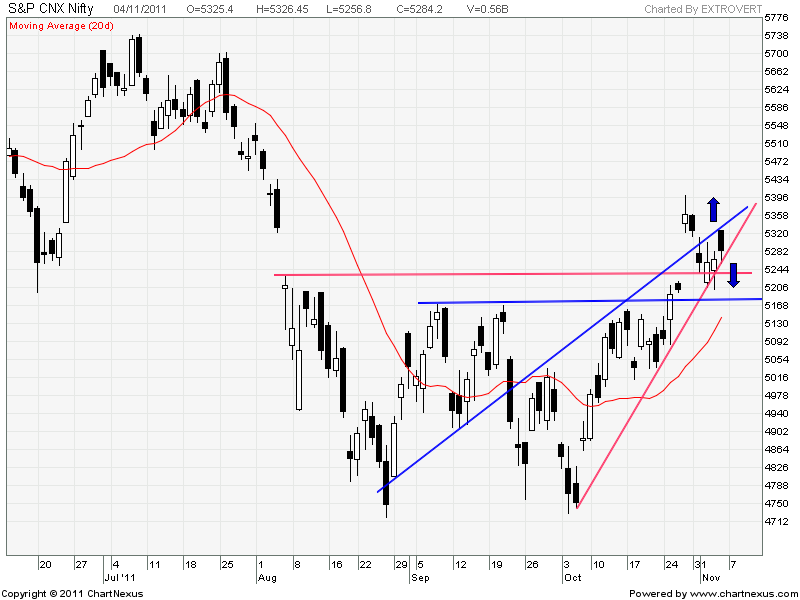 Food inflation rises to nine-month high of 12.21% and after that the Indian Government has done another Petrol Hike by Rs 1.82 which will go ahead and increase fuel inflation also.  This fuel price Hike after Petrol de regulation is burning big holes in pocket of indian consumers and goverment has told in strict sense that Price will not be rolled back.TMC has opposed the fuel price Hike and submitted resignation. Ratcheting up pressure on the government to rollback petrol price hike, MPs of Trinamool Congress, which has threatened to pull out of government, will meet PM tomorrow and this news will be fuel rumors in market and hence trade with caution.

The next week will be truncated week with Holiday on Monday and Thursday so not much commitment should be accepted for traders. Try to exit positions on Intraday basis as  gap ups and gap down can eat away your profits. Nifty has again entered into its trading range from 5200-5326 after the Big breakout above 5170. Nifty has rallied almost 700 points in matter of 17 trading sessions which invites a small correction which we did till 5200 and trading in a range to let the moving averages do the catch up.

Range Bound market are difficult to trade and its not everyone cup of tea to trade hence always limit your position in such market. Do not make a Huge commitment in any trade. 200 DMA@5400 is a tough resistance to move above in a bear market. As seen in above chart Nifty last time also tried moving above 200 DMA failed in 1 attempt than consolidated to gain strength and one more attempt was made as shown in Green Circle in above chart.

2 Attempt also got failed and after that Nifty collapsed till 4720. We can witness the same repeat again if we are unable to cross 5400 in November Expiry.

Importance of Crossover of 200 DMA and 50 DMA 200 DMA and 50 DMA are very important indicator for strength of market.

Now look at the above chart of Nifty and India VIX Now Look at VIX  chart using 200 DMA and 50 DMA combo. VIX is still in Bullish trend and hence till we do not see a negative crossover in VIX we are bound to see more fall in Nifty and rise in VIX.

Hence we can say the rally is not the end of Bearish run and hence more pain/correction is to come over.

Please note the above observation is not for trading reccomdation in Nifty but an observation worth to be noted over and remembered before making any Big commitment in market. On Weekly charts Nifty took support at 20 W SMA @5202 and gave another upmove till 5324 which again got sold off.

Last Week Nifty has formed a Weekly Inside day candle its a very strong indication of Big Up move coming next week, once 5360 gets broken on upside or once 5202 gets broken on downside.

As next week is a truncated week we can see volatile and big moves in term of gap up or gap downs.

Weekly charts we are seeing formation of lower high which in turn again indicates bearishness creeping into NIFTY.

On Monthly charts Nifty is down -0.8%, after 7.8% move in Month of October.So as per previous charts and data i accept November month to be a month of consolidation and range bound market with a Caveat no GLOBAL BLACK SWAN EVENTS HAPPENS.