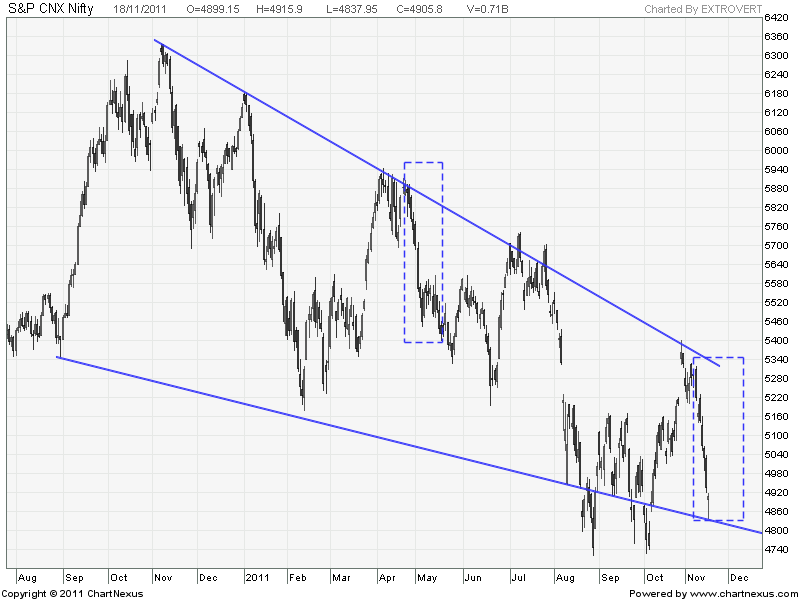 Nifty on WoW basis is down 5.5% with a waterfall decline.

The INR has been eroding its value precipitously in recent times,It has seen 14% drop in last 1 year ,most of it coming in last 3 months making it the worst performing currency in Asia.

Decline in Rupee has inflated our import bill also as India is net importer of goods with Oil having the largest portion. This deficit would need to be funded through borrowings or equity investments like FDI. This increasing deficit in turn causes worries for the FII and eventually they pull out Dollars adding pressure on INR. Thus it becomes a vicious cycle difficult to get out of.

Lets have a look on technical factor

Nifty Hourly charts on Friday made a low of 4838 on Friday just a tad above the gap area of 4824-61. Nifty has fallen almost 300 points in matter of 5 trading sessions without any sort of retracement. Hourly indicators are moving out of oversold zone with the recovery seen on last hour on Friday’s session. 4991-98 should be the resistance on upside as shown in rectangle as Nifty consolidated around this level before showing the fall till 4838. On daily charts Nifty was unable to cross 200 DMA and as discussed in previous week 200 DMA is above 50 SMA which can lead to collapse in Nifty  and it showed its effect last week. Daily channel trend line comes at 4522 levels. So if low of 4720 gets taken of or broken on a closing basis we are in for another 200 points fall as per trend line theory. I did a brief comparison last time when Nifty showed such waterfall declines 5890-5436 was the decline in 8 trading sessions, Currently we have fallen from 5317-4838 in matter of 7 trading sessions. Stock Markets never move in straight line, Fresh shorts does not make a good risk to reward ratio at current juncture as Nifty took support at lower end of trendline on Friday. How to identify the current down trend is Weakening? Going by classical TA theory for current downtrend to stop lower lows should stop making ie. Market should not close below 4838 on Monday if the current down trend needs to come to an end.

Next week being expiry expect heightened volatility and wild swings in Nifty so would advise traders to be cautious with there positions and do not commit large capitals in such market. Nifty broke the Weekly trendline which is bearish in short term from last 3 weeks nifty has been declining falling 8.2% in 3 weeks without any significant retracement. Break of 4838 will lead to another fall till 4758 and eventual break of 4720 will lead to 4522 and 4488 as per weekly trend lines. Observe  the green circles in above chart after 3 weeks of decline we had a relief rally of 4%, Current structure we had decline by 3 weeks in a row and we can see a relief rally provided that 4838 should hold next week. On Monthly charts Nifty has just closed above its Monthly trendline which leave some hopes for Bulls .So next week just watch for the support of 4838-24 range on closing basis. Close below this will lead to another 4-5% fall in Nifty if held i accept a rally till 5050-5145 levels. Highest volume bars are at 4998,5050 and 5150 levels which becomes the  resistance in Upside in Nifty and shall be used to short Nifty with 20 points sl and booking longs taken at lower levels.

As per Options data no strike price has a Open interest of 80 Lakh while we are entering in last week on expiry which shows the confusion market participants are having on nifty range.

Last Week trend deciding level was 5169 and if someone has taken position below it has been rewarded handsomely, I would always advise to keep booking part profits of mentioned support levels.

From last 4  trading days except Friday  market after opening goes in 30 points range and the move starts only after 2 PM after the EU cues gets absorbed by traders.