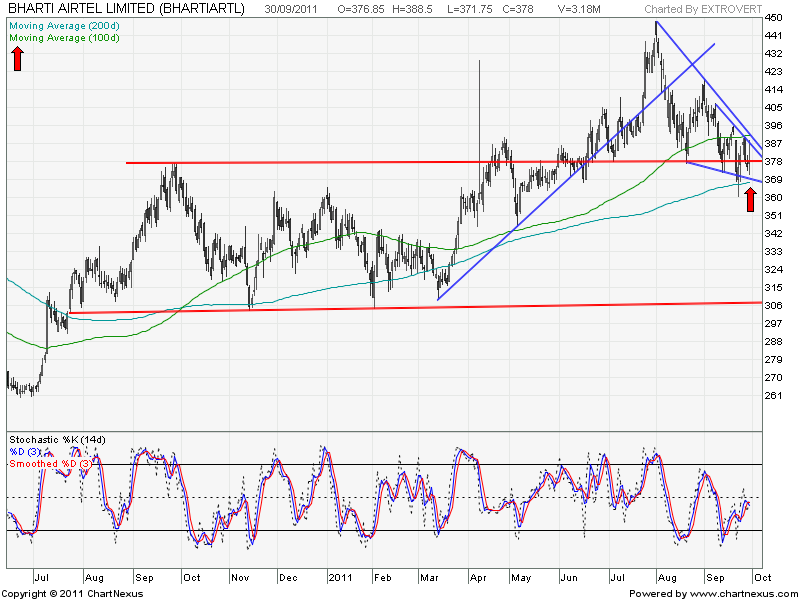 A common trait among newer traders, or among traders that are not profitable is a need for perfection. With so much noise in the media, blogs, and forums about calling tops and bottoms, one would think it’s a trader’s job to predict such things. Expecting to nail the top or bottom is a recipe for frustration and inconsistent performance. Bharti Airtel has been in strog uptrend above 378 levels made a top around 348 and after that has been consistently declining. Now stock faces the litmus test as its trading near its crucial support of 378.

Stock is buy on dips till 368 where its 200 DMA stands for short term traders.

For today levels to trade Tata Motors is respecting its trend line support and resistance on both upper end and lower end, as show in above chart.From Low of 137 TELCO has made recovery till 167 levels but is getting resisted at its 50DMA.

154 is last hope for Bulls today below this level stock will again take a beating and will touch the rising lower trendline at 148 levels. If it holds the level than another upmove to break 166 will be made if not new low will be seen in the stock. Century Textile has been trading in an up trending channel but getting resisted at its 50 DMA @306. Stock is unable to close above it and to add to it the upper end of trading channel is providing significant resistance.

Risk to Reward is in favor of charts till 294 which in turn is its 20 DMA.