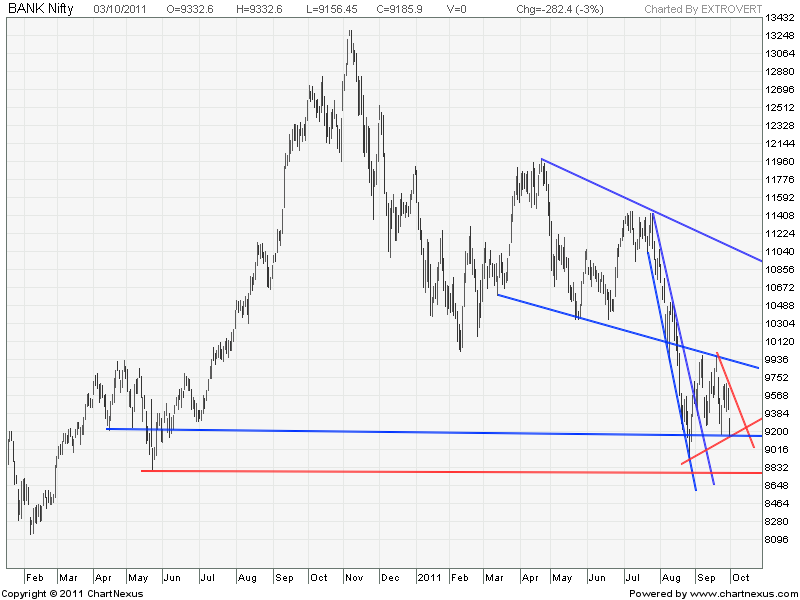 Succesful Trader cut  losses asa  and by doing so kept them small. Everyone will have its share of bad decisions in his/her trading career and keeping losses small in order to avoid huge losses is the toughest part. Bank Nifty will be under pressure as whole Bank stocks round the world are in big pressure due to Greece issue.  Citibank down 10% and Morgan Stanley down 7% in US yesterday.

Internals of Bank Nifty ICICI bank,Axis bank have broken or in the process of breaking new lows.

Technically speaking BN took support at 9156  trend line from 8917 which was swing low. Break below yesterdays low market is likely to open gap down BN if it breaks 9000 levels than we will see a quick slide till the swing low 8917 or slightly above it. ICICI bank has been under pressure from 960 odd levels falling quiet fast made a swing low of 827 near its long term support of 816 made a sharp rally till 927 confirming the patterm of lower lows and bearish trend stock is trading into.

ICICI is now taking support at the rising trend line with a bearish engulfing formation formed yesterday,Today market is likely to open gap down and ICICI should open near its last swing low of 814.

814  can act as a support today but if Nifty breaks 4756 than this low will also get violated and stock is heading towards 775 odd levels. HDIL stock is in bear grip falling from High of Rs 180 towards low of rs 90.

87-90 Range has been the long term support before HDIL made the swing low of rs 62.

RSI is still around 55 so more downside cannot be rules out. Break of 86-90 range on closing basis will make the stock an probable candidate of making new Life Lows ie. below 62 levels.