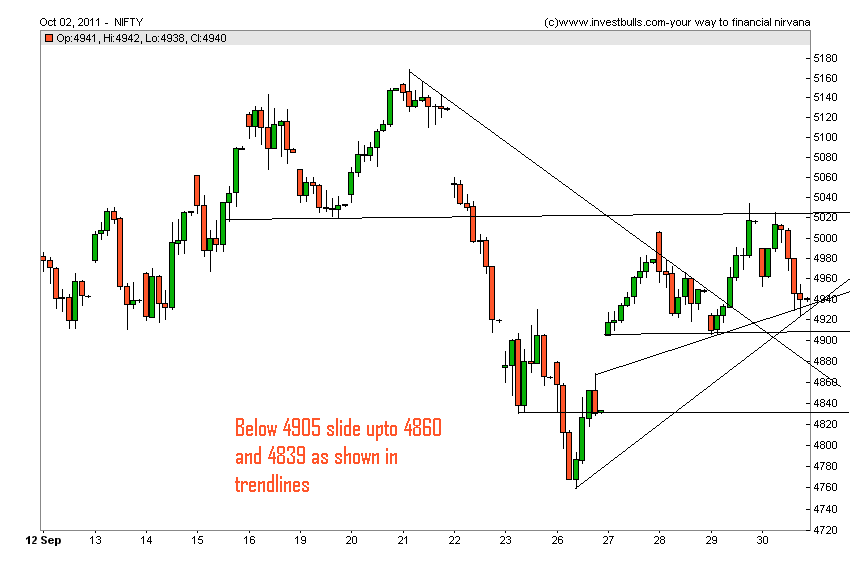 The Indian government has announced that it would borrow an additional Rs 53000 Cores from the market. This would take the total government borrowing for the fiscal year higher by almost 13% from the budgeted Rs 4.17 trillion to Rs 4.7 trillion.

If you think Interest rates are Peaked out the above news give more proof than more rate hikes are coming. You may ask how does higher government borrowing translates into high interest rates.

When demand for funds shoots up, interest rates go up in tandem. So high interest rates coupled tight liquidity are set to severely distress the investment climate which in turn lead to slowdown in economy.

Higher government borrowings mean a threat to the central government’s fiscal deficit target of 4.6% of GDP (Gross Domestic Product) for 2011-12. Additionally, the higher yields resulting from higher interest rates would have an adverse impact of the value of the bond portfolios of banks, forcing them to take mark-to-market losses. On Hourly charts range bound trading is taking place from 4905-5030-4905. Buying Support and Selling at Resistance is the apt stratergy which will work in this market.

Always Remember Traders loose money when thet try to take position in “anticipation” of breakout or breakdown and left in a tailspin when market fools them by going in direction opposite to there trade.

Best Strategy Buy near support with 10 Points Sl  if it gets taken out you have to change your position, If not you will end up doing successful trade.

Always manage your Risk before taking a trade. On Daily charts we are again having a patternless trading with volatile moves creating confusion in traders.We have been trading in the range of 4905-5169 than breakdown came after 16 days of trading made a swing low of 4756 than carried the upward moves.

One thing to note is the Time taken to cover the up move, if you take the time to cover 4905-5159 was 8 trading days but it got sold off in 2 days which gives us one more confirmation than we are in strong bear market.

On Friday we have formed an “INSIDE DAY” candle significance of same is if it breaks 4924 probability of breaking 4905 is 80%. Most probably market should open gap down near 4860 levels looking at closing seen at US markets. On 3 October We have the New Weekly Opening, New Monthly Opening and 15 trading sessions left before the Mahurat Trading session on Diwali, We have seen majot breakdown in Month of October. Hence I would advise everyone to be cautious on there longs

1. We have European Contagion issues.

2. Greek Default — Either more Haircut for Lenders or an orderly default but its has to come.

3. Chinese Economy which is slowing down

4. Stability of Government at Central – BJP asking its party members to get ready for Early Polls

On Weekly charts the downward channel is showing its effect,every rally is getting sold off into with lower top formation in Stochastic. Break of 4758 can eventually lead of 4400 levels as per monthly charts. Looking at the volume profile 4947 is high volume zone and below that 4870 and 4850. These values should be kept in trading plan as these are levels where we can get a bounce back quickly for 20-40 points. It can be used to make extra points.

FII till date have sold 23000 Contracts of NF with Open Interest of 5.32 Lakhs. On friday we have seen an Open Intrest addittion of 22000.

Price decrease with OI rising means shorts are into the system. One Interesting point is FII sell figure in NF is just 88 cores when they have sold 4.2K contracts on Friday. I assume they have done unwinding of longs booked profit and take fresh shorts.

Effect of Quarter Ending or window dressing can be seen from DII buy figures in cash market 517 cores. Reason they want to show better NAV for there Fund and less cash component that why such a Big Buy figure.