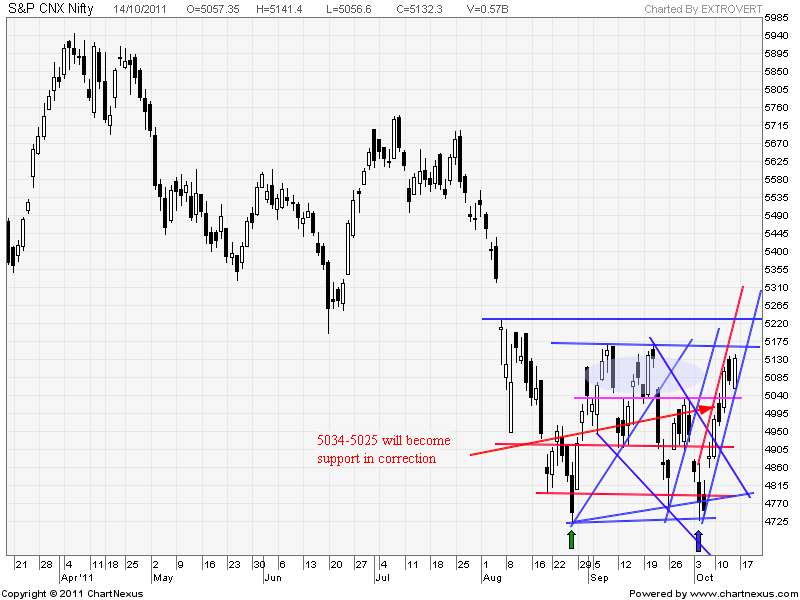 One sector’s gain is indeed a loss for another. While the IT sector has been given a new lease of life following the sharp depreciation of the rupee in the last month or so, the same is proving to be the proverbial Achilles’ heel for state run oil marketing companies. This is because the weakening of the rupee by Re 1 against the dollar negatively impacts their costs by as much as Rs 80 bn per annum. Add to this the escalation that the crude oil prices have seen since 2010 and it becomes clear why the marketing companies are being forced to borrow money even for their working capital needs. This is certainly not a good situation to be in. To meet the nation’s ever expanding energy needs, it is imperative that the oil marketing companies be in good financial health. And such a scenario doesn’t look probable as far as the eyes can see. A prolonged slowdown in the developed world as well as China is perhaps our only real hope left. Nifty Hourly chart is having 2  gap which are not filled in the current up trend which is 7 days old.

Hourly charts are having negative divergence but the daily and weekly charts have moved in uptrend and negating the Hourly time frame. Hourly dips are getting bought as on Friday also when 4957 Low was bought and market moved higher in afternoon session.

5141,5169  will be a important levels to watch as it has been elusive level in previous 2 Uptrends. On Daily charts Nifty has moved into a channel and trading firmly from the low f 4728. Uptrend has seen a breakneck rally of 413 Points without any significant correction. Nifty has closed above 50 SMA 3 days in a row which is a very bullish signal as above 50 SMA we  genrally enters in a trending market but only concern is we have already rallied 413 points in matter of 8 trading sessions and most of people are becoming bullish on market.

A pullback till 50 SMA @5000-5016 should not be ruled out as it will give power to further up move in the current upmove.

RIL was a disappointing set of numbers. The profitably was  given boost by Other Income which rose by 430 cores. They have cash of 61K cores which is giving investor just 7%. It needs to be deployed to get inorganic growth to the RIL.

Sell at resistance @5169  With SL of 20 Points and Buy near Support. This Strategy has given excellent results from past 2 months. Weekly charts has formed Bullish engulfing pattern but unable to cross 5169. Resistance should be broken to see further breakout to 5230 and Gap filling till 5320. On Downside Short term reversal will come only below 4998 only. Above this level all Dips need to be bought . Nifty has close above Weekly High EMA of 5084 which is bullish signal. Just watch out for 5169 Levels Above it things change in favour of Bulls . India VIX has broken its trendline support and closed at 26 levels. Sustaining below 26 again a Bullish for Nifty. Move above 26 and above the trendline resistance will bring a pause in Nifty and alert for a correction.

FII has bought 77542 Contracts in Nifty in this series till Friday with Average buying price at 4771. So they are in Profit of almost 300 points and very well can go ahead and book profits. This is one of the scenario we can consider. This rally was fuelled by Global Rally

till 5169 is not captured and close above it.