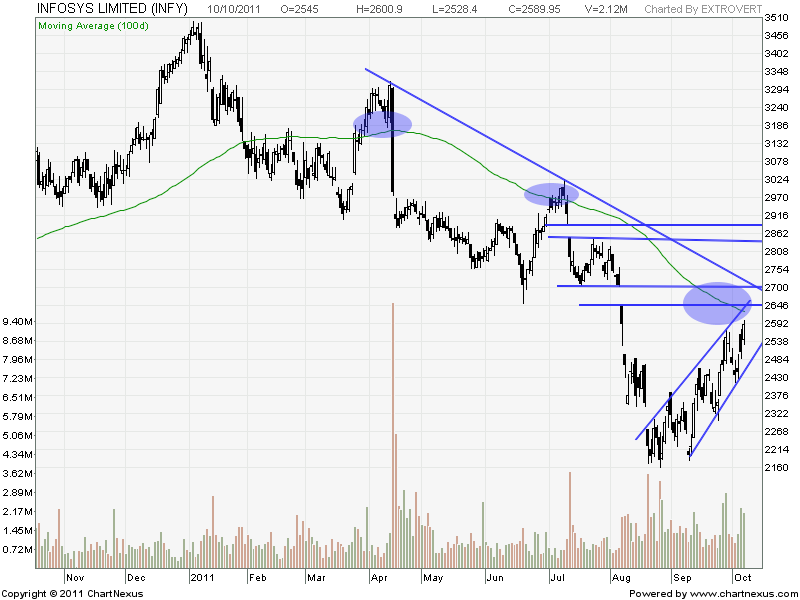 The Q2 Results will be start pouring in from tomorrow officially with the Herald  being done by IT Major Infosys. World markets are on up swing but india will remain immune to it if Infosys does not deliver than street expectation. Rupee rise will be an added advantage for Infy but if there hedging bets have gone for a toss than it can have its negative effect also.

Dollar has strengthen but Euro has weakened   so it will be a net net effect should not be much on bottom line.

Most important thing to note down the commentary of management are they seeing a slowdown and uncertainty in further projects in pipeline. On Technical charts infosys has already rallied from the low of 2180 to 2600 on dollar strength and has been trading in a channel as shown in above chart.

100 DMA@2629 is the main resistance for Infosys as its make or break level in short term.

When Infy declared its results last Quater it Sold off from 100 DMA. On Result day of past 6 Quarters Infosys has corrected and taken the market down with it. Trade cautiously above 2600 its a clear buy and will fill the gap till 2700 and 2900 as marked on Daily charts the gap area. Negative Divergence on Weekly charts will come to play once it starts trading below 2573