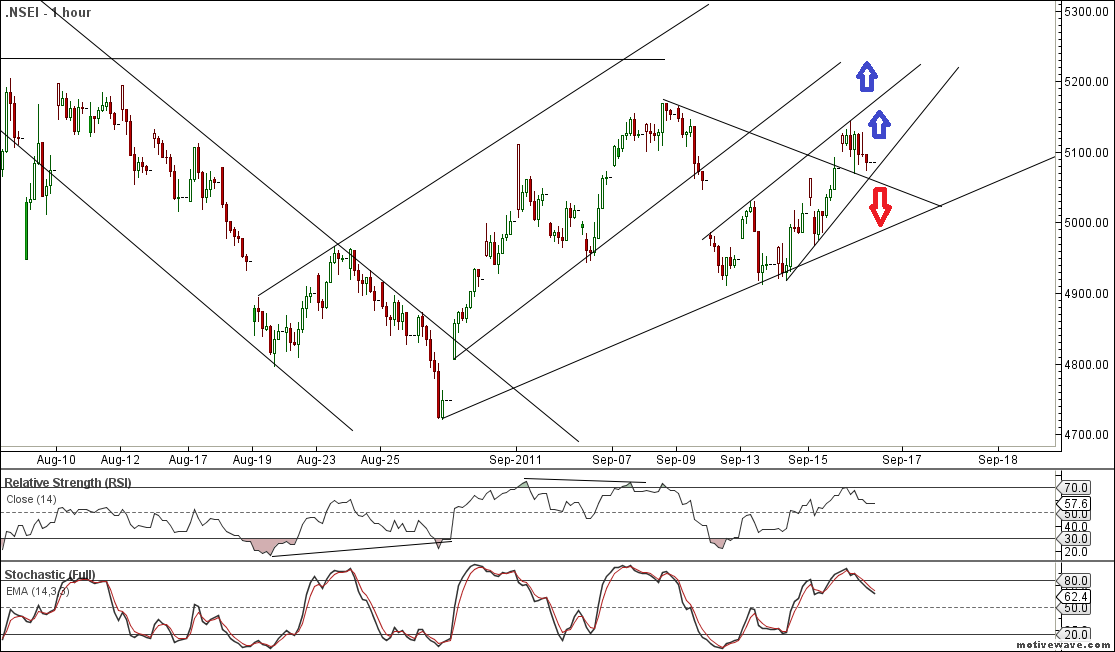 RBI came with another Hawkish Instance and with a 25 BPS and market became Volatile before and after the RBI Policy statement. In these Uncertain Times Do not try to be Heroic and losse your capital.

Traders without plan and system will buy at Upper end of Range and Sell at Lower end and get whipsawed.

Best way To trade this market is

1. Stay Out if you are not confident on Trade Capital Preservation First task of trader.

2. Always Buy near Support with 10 Point Sl and Sell near Resistance till your Sl gets triggered on either end. On Hourly chart Nifty is forming a rising Wedge Formation which is bearish in nature.Multiple Hourly tops were formed at 5130 Levels which becomes the resistance for coming Week.

Rising Wedge Gets Invalidated above 5196 levels. On daily chart we moved out of channel briefly above 5150 but selling from higher levels again pushed us back in the channel. We have made a double bottom formation at 4912 levels and rallied almost 200 Points from that level. Unable to cross 5169 has crept bearishness in the market for next week. Nifty from September has done Nothing just trading in the range of 4912-5150. Range bound trades if understood properly can be a great money minting trades but most of traders get whipsawed in anticipation of Breakout.

So many traders were bearish at 4912 levels and Loaded themselves with PUTS and Nifty Shorts, But market had something else in mind it obliged the BULLS by rallying This is where your Trading DISCIPLINE comes in picture,when you need to change color as market is changing else you will end up at losing end. On Weekly charts Nifty was unable to continue the formation of Higher Highs with a close below 5169 which was previous week high which is the reason why market fall down in last 30 Mins of trades,it was longs unwinding and Shorts creeping in the system.

From past 2 Weeks Nifty has supported 4912 levels which becomes an important swing low, Break of which will lead us to fall of almost 200 points as now we are trading in range of 240 points (4912-5152) On Monthly charts again we have Monthly low of 4912 and High of 5169 tading in between them from past 16 days and Volatility is on rise based on global events.Close below Monthly open of 5109 is bearish in short term