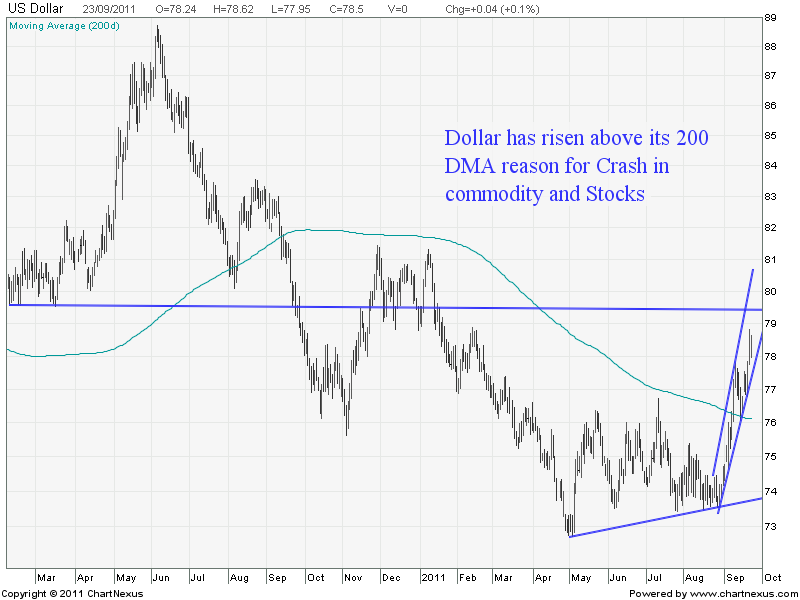 After the drubbing that Nifty received last week which was highly volatile where on Tuesday we are so close of breaking the 5169 level which is upper end of trading range but on Thursday we gave 4.5% in single session and eventually on Friday broke the lower end at 4900 and closed below it.

Before going into technical of Nifty for next week want to highlight few observation regrading last week Commodity correction where Crude  went below 80$ and Silver cracked 20% Gold 8% worst fall since 2008 was due to rise in Dollar which moved above its 200 DMA of 76 and moved towards 78  levels. Above 200 DMA USD can reach 79 and 81 levels which means more correction in Equities and Commodity Rise in Dollar is inversely proportion to Equities and Commodities.

Will Fall in commodity will be beneficial for Indian Government ?

The Indian corporate won’t be able to cash in the full benefits of the same. The rupee has depreciated to hit a 2 Year low  of 50 versus dollar. Hence, even while CRUDE has  come down, the benefit will be nullified as we will have to shell out more rupees per dollar. On Hourly charts Nifty is forming a Broadening Bottom formation which is a highly confusing chart pattern as it can give breakout on top with break of  4911 and Breakdown below 4815.

In Trending markets try to avoid trading based on Indicators as they can remain oversold for prolonged period of time frame. On Daily charts Nifty has closed below 4900 after 16 trading session which technically will be qualified as Breakdown out of trading range of 4911-5169.

IF Nifty closes above 4900 on Monday the trade can give a whipsaw,Use Sl of 4930 on Closing basis as stop loss for all Shorts. Weekly Charts i pointed on last week nifty has failed to form Higher Highs failing to close above 5169 this week we saw the effect with Nifty closing below 4911 and finally forming Lower Lows.

On Weekly charts Nifty has given a breakdown by closing below last week low of 4911 and in turn also below the Weekly rising trend line.

Nifty closed below 5 Weekly low EMA@4888 which is making it bearish in Weekly time frame also. On Fibo charts 4815 is the last support for Bulls and below it probability of hitting new low will increase.

This Week we are having Expiry for september Series

Now Till date we were in range bound market from 5169-4911 which broke on Friday.

Bears are in Profit as per FII Data and if they do not Cover Shorts Bulls need to unwind there positions which in turn will create more selling and snowball effect which will lead to more lower levels.

With so much Short position a Slight Bit of Positive news for Europe and End of Quarter window Dressing can turn the sentiments and lead to Huge Short Covering in Market.

To summarize its a Volatile Week lying ahead with bearish bias  which if traded with proper plan can give excellent profit. VIX broke the 2 year range of 36 and is trading above that levels. Above 37 VIX will favor bears so keep a close watch on it.

The current crisis appears to be spreading across the world. This is the warning signal sounded off by the World Bank’s Chief, Mr Robert Zoellick. He has stated that the way things are going the developing world would start sounding off negative signals very soon. As per him, more than 40% of the developing countries have budget deficits of over 4% of GDP. As a result, if things get worse, they would see major drop in asset prices as well as an increase in nonperforming loans. This in turn would lead to protectionist and populist measures being adopted by these countries. Combine this with the troubles in the advanced economies and we have the perfect recipe for a global turmoil.