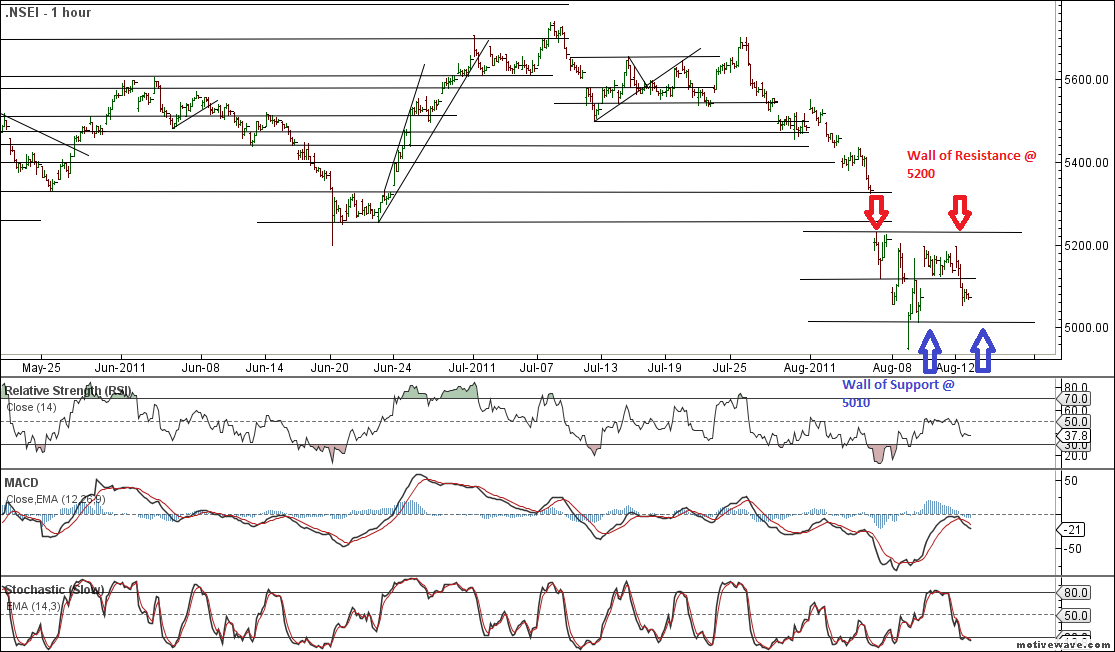 We are living in the time where fear and doubt of reining supreme and trading in Volatile times.Hence Keep your trading volumes low as there is 80% Probability of whipsawing on both sides if you are trading on your emotions. This played out pretty well on Thursdays session where we had shorted near 5121.

As of Now we are in a range bound market(5200-5010) and working on Support and Resistance is best stratergy with small Sl till one trades gets stopped out.

Keep your trading as simple as possible to get maximum out of it. On Daily chart we have formed a double bottom at 5054 which is bullish in nature if 5054 does not get broken out on Tuesday. Good IIP number were also unable to boost the Nifty to break the range of 5200.

Bull Case:Market might test the previous Low of 4956 or make a slightly higher bottom,Trap Shorts and than break the resistance of 5200 and advance ahead to fill the Gap formed at 5320-5230

Both Cases are possible as a trade we need to trade with our system and discipline to mint money.

Indicators are still in oversold region. Fibo Support and Resistance play a vital role and give good trades. On Weekly Chart is presenting the bearish possibility as Nifty was unable to cross over 5100 this week. We can give it a pass if on Tuesday it is able to sustain above this levels.  But if unable to close above it we are in for atleast touch of previous low of 4956 and another low of 4800 is on cards. One thing i am most perturbed about is Every one on Street is bearish and everyone is talking about 4800 levels atleast. Blue Channel talking of 4800 levels and I have seldom seen market working as per mass consensuses or hear mentality.

This thought process is making me bullish for near term but bottomline is never follow ur emotions so lets see what happens the next week.

FII have shorted -112504 Contracts of NF this series and this needs to be covered in some part of next 9 days. On Monthly Chart its a clear cut breakdown and If monthly close we are unable to close above this trendline we are in for 4300 levels by the end of this year.

Levels to Trade Next Week

I would ask readers to actively participate in below comment section by leaving your question and sharing your knowledge.

Support Ana Hazare and Relive our country from Corruption