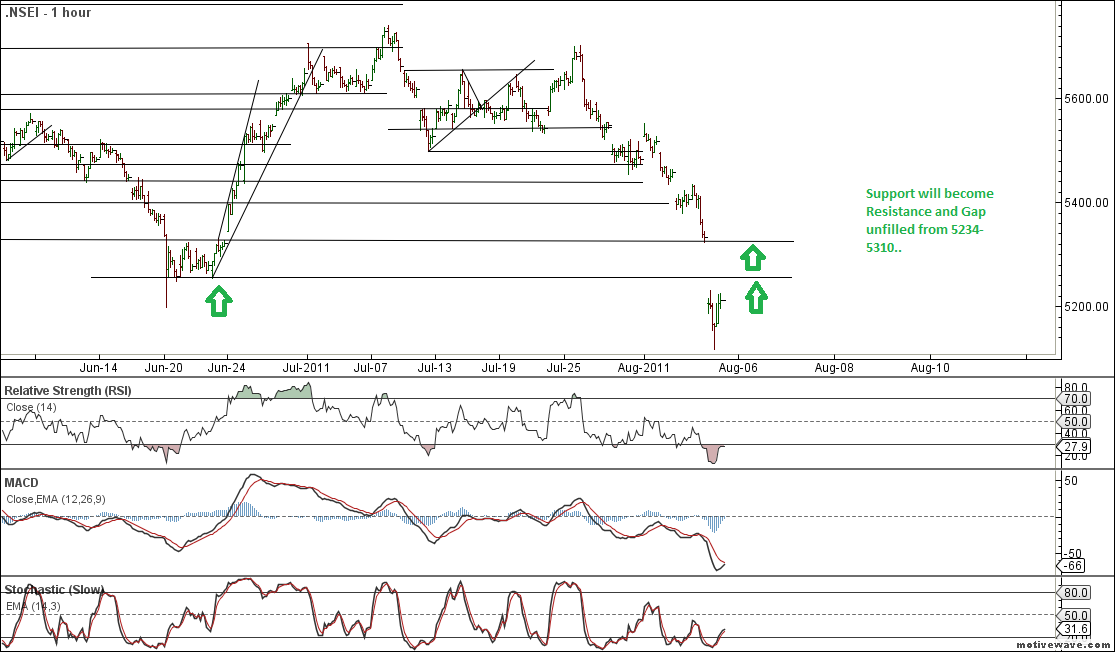 It has been a dramtic turn of events the last week Europe Crashed 10-13% in a Week USA Plunging 5% in a Week and The decision by S&P, the global ratings major, to cut US’s sovereign rating by a notch to ‘AA plus’ from ‘AAA’.

USA has lost its priced crown which will have its effect on both commodity and equities. In a sense its good for India in Long term.

For the Readers who want to know how Credit Agency sees India: India’s Rating is at BBB- a tag upper than Greece@ CC. On Hourly Chart Nifty has opening gap between 5434-5310 and 5258 was support level for Nifty and the same has been broken. Nifty first resistance will be at 5258 as Support will become resistance. Trading above it Nifty can close the gap it formed on last Friday’s Gap down.

In Trending market No point in talking about of Indicators as they remain overbought and oversold on extended time frame.See the above Hourly Chart for the same.

The Only positive coming out of this Global Crash where $2.5Trillon of wealth has been wiped off in matter of 5 days is cooling off in the commodity prices and crude which will be Booster of India and selling will be less as compared to other markets. On Daily Charts as we have been discussing before Break of 5500 trendline and a fall in Nifty till 5100 where the panic selling took place as soon as 5180 got taken off. From the lower levels we have seen good amount of buying as can be seen in long tail formed at friday’s market.

Only Concern is US debt downgrade which might have some selling pressure again on Friday if Obama administration did not do something dramatic in weekend to soothe investor. Irony is that Moody’s and Fitch have still retained the AAA rating on USA. On Weekly Chart Trendline is broken and next level of support will come at 5080 levels if 5116 gets taken out on downside. Well there is no point of seeing support in trending markets as they get easily broken.

Fall is crude is only Silver Lining for India’s perceptive. As per the Fibo levels from 2252 to 6318 Nifty next important support lies only at 4779 levels the 4800 support which all Blue Channels are talking about. 61.8% retracement is know as Golden Ratio so do Keep an eye on 4779 levels. On Monthly chart the lower trendline is broken and needs to see monthly closing if we can see the close above 5440 levels.

Lot of volatility will be there in coming week. Book Profit as soon as it comes Levels mentioned are Spot Levels